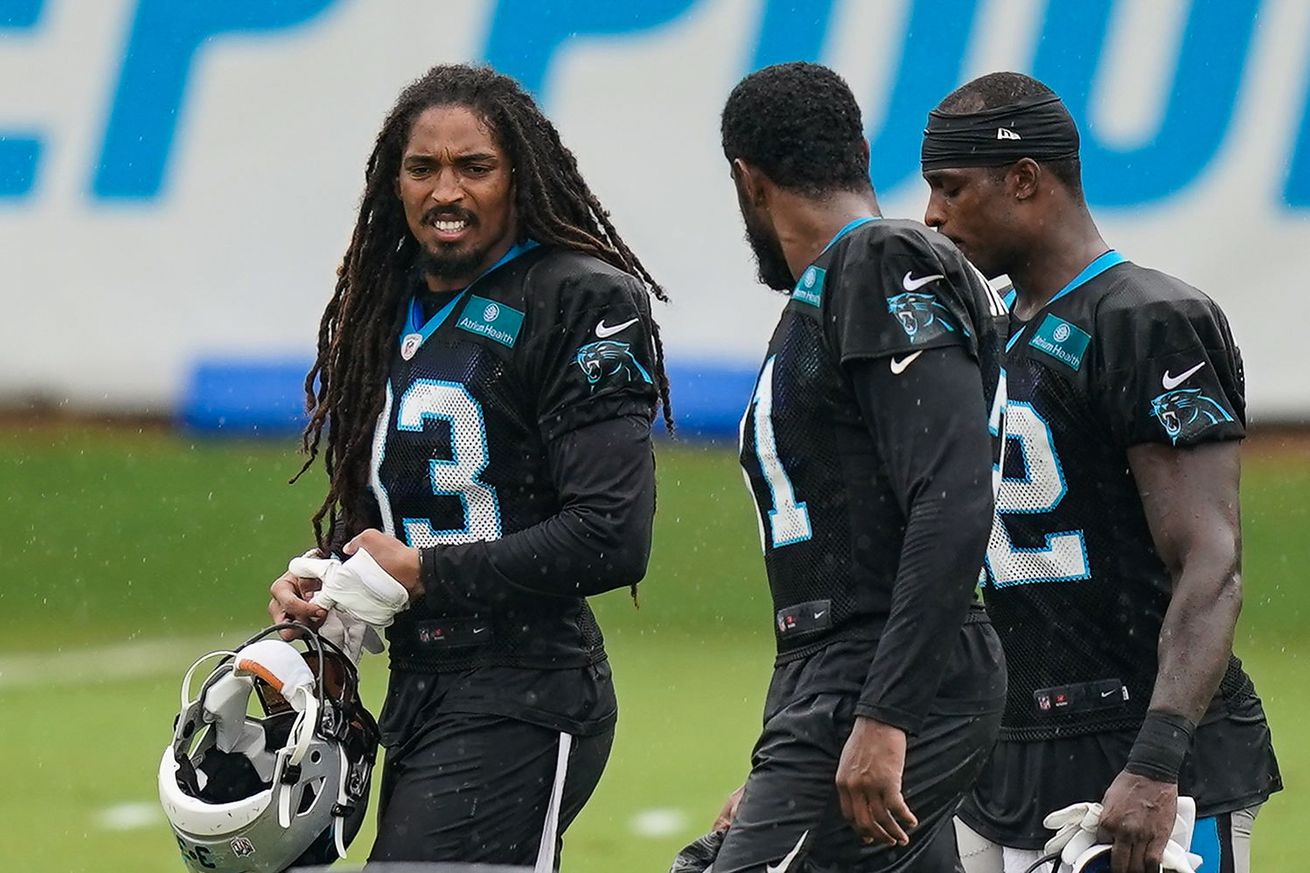 On Tuesday I compared the assumed starters and depth charts for the Las Vegas Raiders and Carolina Panthers, who meet on Sunday. This is not a direct “matchups” comparison because these positions don’t face off against each other, but weighing the strength of groups on each side and then making your own assumptions once we grasp the full picture.

To continue to build that picture, here are the defensive players for each team.

Carolina may have a talented pair of defensive tackles, but combined they played in two NFL games last season. Brown was at Auburn and Short missed 14 games and how the defense performs may hinge on just how available and productive they are this season. In 2018, Short played in 14 games and made the Pro Bowl but it may have been his worst campaign as a pass rusher in at least five years, totaling 3.5 sacks and 16 pressures; four players on the Panthers defense had at least 22 pressures last season.

Most tackles for loss or no gain among power five DL since 2018:

Brown was the team’s top draft pick and while training camp reports have been glowing, I find myself hearing that a lot more than usual about rookies this year.

Collins had 21 pressures with the Dallas Cowboys last season and there’s logical optimism that he could help take the Raiders edge rushers to another level with his presence. Hankins has been a fine defensive tackle under Jon Gruden and even had 11 pressures himself last season.

Over the last two drafts, Carolina has spent two firsts and a second on the defensive line, familiar territory for an organization that in the previous decade drafted Short, Star Lotulelei, Kony Ealy and Vernon Butler. While not all of those picks worked out, Burns got off to a great start with 7.5 sacks and 23 pressures last season. Only Josh Allen, Nick Bosa and Crosby had more as rookies in 2019; Burns had a couple more QB hits than Crosby, but he had nine more tackles for a loss and 2.5 more sacks.

Brian Burns had 7.5 sacks on 43% of the defensive snaps last year, how is that even legal

Yetur Gross-Matos, their second round pick this year, has been listed as the starter opposite of Burns. Whether that’s a good sign for Gross-Matos or a bad sign for Carolina’s edge depth will be revealed over time.

I think Crosby could be at the start of a great career as a well rounded defensive end. People say things like “Can only go up from here” with players like Clelin Ferrell, but that’s not true. Ferrell didn’t have a terrible start for one, but we also often see players slip backwards in the early years of their careers. This is only to say that I can’t give Las Vegas points for someone like Ferrell until he shows it on the field. like Crosby and Burns did as rookies last season.

Most total pressures generated among rookies in 2019:

If he performs again like he did last season, Ferrell could lose snaps to Key or Nassib, if they’re looking average or above average. Key’s been the talk of camp in many respects and attention around Ferrell is really more based around his size and not as much around his play. Is that because the Raiders are keeping information close to the vest or is it representative of the truth and if so, should Key be starting?

It’s incredible to see the degree to which these two groups flip-flopped from January to now. Back then, the Raiders were considered to have among the worst linebacker groups in the NFL, a unit led in tackles in both 2018 and 2019 by none other than Tahir Whitehead. Vegas replaced him and a Rube Goldberg of linebackers with Littleton and Kwiatkoski, giving them expectations of springing from the bottom of the league at the position to top-five.

Carolina’s linebackers in January included Luke Kuechly, Bruce Irvin (8.5 sacks) and Mario Addison (9.5 sacks) but Kuechly retired and the other two left via free agency, not that they would have really made sense for the Panthers this year anyway. Shaq Thompson — whose quirky fact is that he has played in exactly 14 games in all five seasons of his career — was extended for four years and $54 million last December, making it a franchise move rather than a Matt Rhule move. I’ve not read much praise of Thompson’s play but he’s one of the few starters on the defense with some quality NFL experience.

LB Shaq Thompson just rolled up to practice with a black jersey, which is a good sign. Has been dealing with a groin injury. Today is the last practice without a daily injury report as the season gets going. #Panthers

Chinn was drafted in the second round as a safety but is expected to get significant snaps at linebacker to open the season.

I just want to point out that the Panthers didn’t draft a quarterback and that there’s a draft next year. Jackson has not received many positive reviews over his first two seasons in the league but is by far Carolina’s best cornerback based on what we know of these players. Starting opposite of him is Troy Pride, one of four rookies expected to start for the Panthers defense. Pride was a fourth round pick out of Notre Dame.

Elder was a fifth round pick in 2017 and has played in 14 career games, including only one last season. Thomas-Oliver was a seventh round pick this year and Douglas was just picked up after being let go by the Philadelphia Eagles. This is all of Carolina’s cornerbacks.

Arnette is also a rookie and to this point, how fair of me would it be to rate him as “better” than Pride when neither has played in an NFL game? I understand the logic of doing so and I know how they’re talking about Arnette at camp, but I’ll refer back to the word “glowing.” In any case, Mullen and Joyner do have some good NFL film out there and I’d not be surprised for them and Arnette to all play well.

I would be more surprised if Pride excelled but I just don’t reward players for expectations. Especially mine.

Abram has only played in one career game but I feel comfortable giving him more credit because he was also exceptional in camp and the preseason last year. Abram being good makes sense to me and I’m going to stick with that. Boston has also been good and could be a bit underrated; safeties continue to have a harder time finding work than most positions.

#Raiders safety Johnathan Abram: “I’m very excited to get back out. Just being smarter this year, making sure that I’m available because the best ability is availability. Just making sure I stay healthy. Just being a smarter player this year. That’s my biggest concern.”(continue)

Las Vegas wanted to find an upgrade over Harris in either the draft or free agency but released Damarious Randall and didn’t end up with a true safety in the draft. Could Harris have just won the job outright?

Overview: As much as I like to stress not rushing to judgments on teams prior to a season, do the Panthers even look like a team that is trying to be competitive this year? They fired Ron Rivera (fair) and hired a coach with one year of NFL experience as an assistant and with two semi-brief stints at colleges that don’t really have “national powerhouse” aspirations — and in both cases his first year at those schools featured double digit losses.

Rhule, like Kliff Kingsbury a year before him, may not necessarily be a bad hire but if Carolina wanted to up their odds of winning in 2020, then they would’ve just stuck with Rivera again. Rhule is a long-term gamble.

The Panthers did sign veteran quarterback Teddy Bridgewater, who helps them more than Kyle Allen, Will Grier or even Jameis Winston and Cam Newton. They also traded a young Pro Bowl guard for 33-year-old tackle Russell Okung and signed receiver Robby Anderson, but none of these moves are necessarily to start winning games in 2020. Carolina wants to develop D.J. Moore, Curtis Samuel and Anderson into stars and want to open up the options for their investment at running back in Christian McCaffrey.

Having a decent veteran quarterback and left tackle — plus 31-year-old center Matt Paradis — helps those players gain opportunities to get better in real games. Bridgewater has a three-year contract that pays him $14 million in 2020, $23 million in 2021 and $26 million in 2022. But there is $21 million in savings in 2022 and so the Panthers could get away with having one of the lowest-paid starters this year and then having him in the middle range as he serves one season as the veteran mentor to whoever they draft.

Offensively, I can see the argument for things falling just right under offensive coordinator Joe Brady and Carolina being decent on that side of the ball. However, I bring up this theory of the Panthers not caring to win right now because of their defense.

The Panthers finished 31st in points allowed last season. They were 26th in DVOA on defense, including 12th against the pass and 32nd against the run. Carolina stayed competitive against the pass thanks to a front-seven that had five players with at least five sacks — but four of those five players are now gone. Rivera and defensive coordinator Eric Washington are gone. The new coordinator is Phil Snow, who served the same position under Rhule at Temple and Baylor. His only NFL job as an assistant for the Lions from 2005-2008.

Pretty obvious #Raiders Gruden is going to coach rings around Matt Ruhle. He’s figured out how to play three wide receivers and a fullback for 12 players on offense, and three cornerbacks and three linebackers for 12 players on defense. Panthers don’t stand a chance. https://t.co/x8tRTT1aiM

It could be a genius long-term move for the Panthers, but what players on defense other than Burns would get fans, coaches and front office personnel to believe that they’re going to do any better than 31st in points allowed in 2020? Ranking 26th in DVOA means they actually have plenty of room to get worse and I’d think that’s what we are witnessing with a group that intends to start four rookies in Week 1.

And the veterans include players like Whitehead, Burris, Jackson, Jermaine Carter and Short coming off of a lost season.

I’m not sure how long it’s been since we could say that the Raiders entered a season with a better defense than the Panthers but that’s what I’d feel comfortable saying today. I’m not even sure Carolina would dispute that they’re going to spend the next 17 weeks “figuring stuff out” until they reach the next offseason and they start plugging the holes at linebacker, secondary and find their next franchise quarterback to develop.

The Raiders enter Week 1 hoping they’re two seasons ahead of that curve and that Jon Gruden and Mike Mayock have made mostly right decisions to get them to this point. And that they’ll at least start the season 1-0.