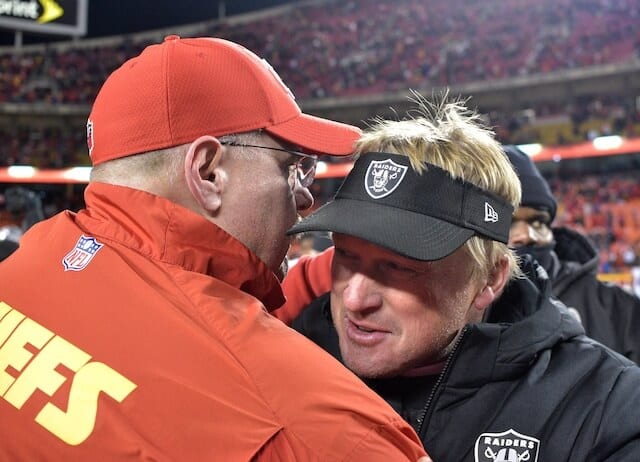 The Las Vegas Raiders currently sit at 6-3 this season, making them legitimate contenders to make the postseason and perhaps even challenge the reigning Super Bowl champion Kansas City Chiefs for AFC West supremacy.

The Raiders’ biggest win of the season came in Week 5 over the Chiefs, which was Derek Carr’s first win at Arrowhead Stadium.

After the Raiders took home the big victory, they reportedly took a little victory lap around Arrowhead Stadium while on the team bus.

According to Adam Teicher of ESPN, that did not make Chiefs head coach Andy Reid very happy:

“They won the game, so they can do anything they want to do,” the Chiefs coach said on Monday. “That’s not our style.”

Later, Reid was asked whether it was more difficult for a team to play an opponent for the second time when it won the first game between the teams. Reid said no, then added, “I think they [do] or they wouldn’t have driven the bus around the stadium.”

Raiders head coach Jon Gruden responded to Reid’s comments on Monday, and he does not believe that victory gives the Chiefs extra bulletin board material for the rematch in Las Vegas this weekend:

“Not really. I mean, you can find a smart-aleck bus driver in Kansas City who made some snide comments when we got on the bus. Maybe that’s why we drove around the stadium, to tick him off. You know, this is ridiculous. Next question.”

The Chiefs currently sit at 8-1, so if the Raiders want to have any chance at winning the division, they will have to beat Patrick Mahomes and Co. in Week 11 to complete the season sweep.

Reid is going to have his team ready for the big rivalry game though, and there is no doubt that the bus victory lap will give his team at least some extra motivation, as if the standings implications weren’t enough:

“It’s two good football teams playing each other,” Reid said. “I don’t think either team likes the other that much, as they’ve stated before.”

The Raiders have been playing good football this season and could be welcoming some key players back from injury for the matchup against the Chiefs. With the AFC standings so tight through the first half of the season, winning in Week 11 would go a long way for Las Vegas and their playoff hopes.