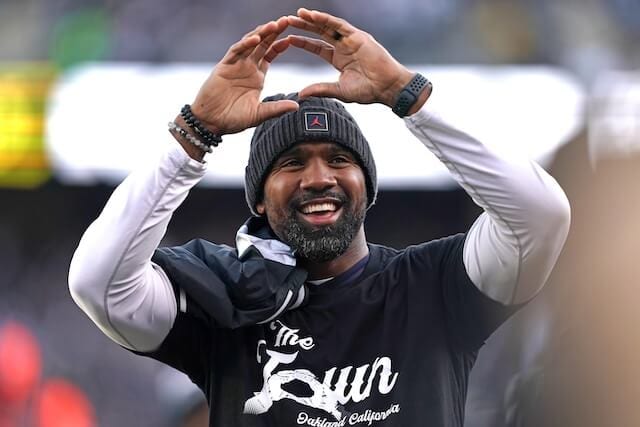 The Las Vegas Raiders may have finished 7-9 in their final season in Oakland, but there still is a ton of optimism moving forward after a solid offseason in which they made significant upgrades on both sides of the ball.

One area of focus was giving Derek Carr more weapons to work with after the Raiders had a revolving door at the wide receiver position in 2019.

They addressed that through the draft by taking Henry Ruggs III in the first round and then Lynn Bowden Jr. and Bryan Edwards with back-to-back picks in the third. They also added veterans like Jason Witten and Nelson Agholor in free agency, which adds to their already-talented group of weapons that includes Josh Jacobs, Jalen Richard, Darren Waller, Foster Moreau, Tyrell Williams, Hunter Renfrow and Zay Jones.

One analyst who is high on the Raiders’ offense going into 2020 is one of the franchise’s all-time greats, Charles Woodson, via Raiders.com:

“Offensively, they’re all different type of guys, man,” Woodson said in regards to 2020 NFL Draft picks Henry Ruggs III, Lynn Bowden, and Bryan Edwards. “They’re guys you can do different things with and I kind of got excited about adding those guys to Josh Jacobs, [Darren] Waller, and Derek Carr. I think offensively they have a chance to be explosive and defensively I think, they brought in [Cory] Littleton from the Rams, he’s going to be a key. I think they’re going to have to gel as a defense and some young guys are going to have to step up and make some plays for that defense, but offensively I think they have a chance to be explosive.”

Woodson also discussed how excited he is for the 2020 season, where the Raiders will begin a new chapter at Allegiant Stadium in Las Vegas:

“Exciting times, man, it’s like Christmas. Any time you get a new toy, it’s pandemonium in the house, and that’s how I feel the Las Vegas Raiders are now,” Woodson said on air. “You’ve got a brand new toy, it’s going to be pandemonium surrounding that new stadium when they have their opening game there. I’m excited to see this new team, I think they’ve done a great job out there. Gruden and Mayock, I think they’re in lockstep in what they want out of a team, and what kind of players they want out of a team.”

Woodson has given the Raiders nothing but support over the years both on and off the field, so it is not surprising to see that continue to this day.

The Raiders have high expectations going into the 2020 season for the exact reasons Woodson listed, and now it will be up to the players and coaching staff to go out and get the job done.

The post Charles Woodson Believes Raiders Offense Has Chance To Be ‘Explosive’ In 2020 appeared first on Raiders Newswire.