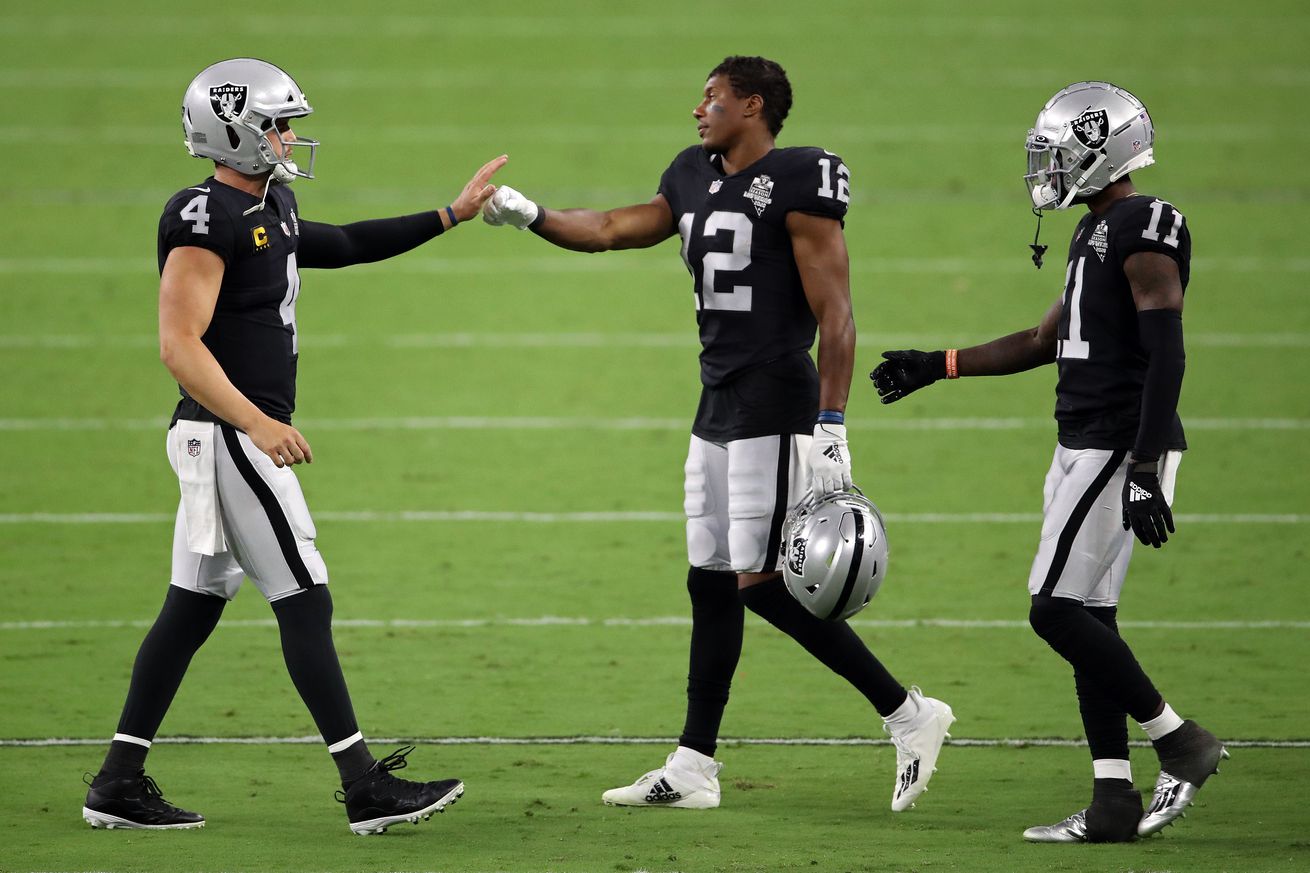 The QB, the weapons, the defense and the schedule

The Las Vegas Raiders make their annual stop in Kansas City this Sunday at 10 AM slot machine time and a win over the Chiefs would ease the pain felt by their two recent losses and provide more hope for a season ahead than the franchise has seen in quite a long time. Even the 12-4 Raiders in 2016 who started 4-1 that season would fall 26-10 to Kansas City in Week 6 and resign themselves to being in second place until their next opportunity.

Oakland won six games in a row after the loss to the Chiefs, a streak put to bed by a 21-13 loss to the Chiefs. Both teams went 12-4 but Kansas City’s odds of skipping the first round and hosting a playoff game were rarely in doubt.

A Raiders win would put “doubt” into the equation for the first time in a long time.

When Jon Gruden returned to the Raiders, ‘rek was a 27 year old coming off of back-to-back-to-back Pro Bowl appearances and clearly there’s been a belief that better weapons would equal an even better Carr. Now in his third season with Derek Carr as his quarterback, after going 4-12 and 7-9 in the first two, I don’t believe there’s a mini-cooper’s worth of a chance that Gruden is going to idly sit back and watch the team simply scrape for the seventh seed with the same guy under center for the rest of the season.

Completion percentage needs to be ignored at this point. On Thursday night, I watched the Bears beat the Bucs 20-19 but was rarely impressed by the play of Nick Foles, a quarterback who has been given no less than eight opportunities to prove himself as an NFL starter and so far has come up with no permanent gigs and one Super Bowl MVP! Did Foles make one or two throws that he needed to make in order to make up for all the throws he missed? He did. But I would say it was a good game to watch, but nevertheless concerning if you’re a Bears fan.

Foles completed 71.4-percent of his attempts. I couldn’t believe it, but it’s 2020 and then I gave in and believed it.

Similarly, avoiding interceptions has become more commonplace, especially amid a season in which holding penalties are down more than 50-percent from 2019. The NFL is begging teams to score more points this year, so the 20 and 23 point totals that Las Vegas has had in the last two weeks is not going to be enough to win. That still starts with the play at quarterback.

Through the first 49 games of the season, officials have thrown flags for 101 offensive holding penalties. That’s 59% fewer than in 2019 and 45% lower than the previous five-year average.

The top three scoring teams after four games are the Packers, Seahawks and Cowboys. Aaron Rodgers and Russell Wilson are battling for MVP against Josh Allen (Bills are fifth in points) and Dak Prescott is on pace for over 800 attempts and nearly 7,000 yards. He’s not going to get there (well, I won’t put it past Jerry Jones to try and see if a quarterback’s arm will literally fall off) but as important as a strong running game is, the teams still need to have a quarterback capable of winning the downfield passing battles and consistently putting the ball into the end zone when they get opportunities to do so.

According to SportsInfoSolutions, Carr is 14 of 25 on intermediate (10-19 yards) passes and ranks 19th in rating on those throws. The Raiders are 20th in red zone scoring percentage.

The offense might feel like an improvement but do keep in mind that because of the changes in calling holding and the general “unstoppableness” of certain plays this season, the whole league has improved its ability to score. The expectation has to become, “Is this a 30-point offense?” I’m not saying that Derek Carr can’t — I’m not saying that — I’m only saying that he has to and that Gruden won’t be able to sit back much longer and watch his offense score only enough to get the team another .500 record.

Las Vegas signed Marcus Mariota to essentially a one-year contract with a favorable second year to the team if they wanted to see him again. I don’t believe that Gruden and Mayock paid Mariota a guaranteed $7.5 million to have him sit on the bench and miss the playoffs. I don’t think that is logical. If the Raiders miss the playoffs, or barely get in and then immediately exit, obviously Carr will be gone. I can’t imagine this would be up for much debate after seven years.

I don’t think Gruden returned to the NFL without having it in mind that he wanted to develop somebody into a great quarterback, whether that was Carr or Carr’s replacement. I don’t think that being average in year seven will lead to a year eight.

It’s been proven time and time again that teams often do not even realize who the best quarterback on the roster is. This can go back many decades I’m sure, but easy examples would be Kurt Warner on the 1999 Rams, Tom Brady on the 2001 Patriots and Ryan Tannehill on the 2019 Titans. These are not people who I am comparing to Mariota, these are people who have proven that coaches had massive blind spots as to their abilities and development curve. In the case of Warner and Brady, or Tony Romo as another example, they did not even appear to be NFL players at all to many people both inside and outside of the building. Up until the point where the teams had to find out if they were and those moments forced them to start.

If teams can be that unaware of how good the backup or third string quarterback actually is, then we must always allow for the possibility that that option B could be better than option A.

Marcus Mariota outplaying ‘rek would be surprising to me for a number of reasons, but if the Raiders don’t prove capable of matching point totals with their next four opponents — Chiefs, Bucs, Browns, Chargers — then I believe we’ll find out if he is. And I love being surprised, isn’t that what contributes to the “exciting” element of all sports?

Speaking of Carr and his weapons, I can’t ignore the quality of players he is throwing to this season and how that contributes to Las Vegas not scoring enough points these last two weeks.

Hunter Renfrow is a reliable target, but is he going to be the team’s best receiver this season? Is the team ever going to feel comfortable giving him 10 or more targets in a game?

The mission was to improve the weapons and yet when Gruden returned to the team, they had Amari Cooper and Jared Cook and Jordy Nelson. Through the first four games, the Raiders have turned to Waller and Renfrow and then after Josh Jacobs it takes a while before you even get to the number of targets for Zay Jones and Nelson Agholor.

The starting receivers at the beginning of the season were Henry Ruggs and Bryan Edwards.

Obviously things have not gone to plan and the plan to open the season with two rookies as the top receivers was risky. There’s nothing we can expect from Ruggs and Edwards over the next 12 games, even if they are healthy. Regardless of our expectations, there’s no way to know how they will perform in the NFL until they get opportunities to perform in the NFL and we haven’t seen enough of those for them yet.

Ruggs will probably return this week but he’s bringing with him 91 snaps of NFL experience, following a college career that included 98 receptions in three years. Edwards has been held out of practice this week after missing the last game.

Mayock and Gruden were hoping that the long-term solutions would also provide immediate returns but until Carr or Greg Olson start treating any of these players — Renfrow, Jones, Agholor, Ruggs or Edwards — like a number one receiver, I won’t believe that the team trusts that it has a number one receiver at this stage.

I assume this is one of those games where people say “Can a Week 5 game be a ‘must win’?” and the answer is that regardless of what week it is, teams have to beat division rivals. Especially when those rivals are probable to challenge for the most wins in the division.

However, being 2-3 would not be what I’d focus on if it did happen.

In the last three seasons alone, seven teams started 2-3 and made the playoffs, including the 2018 Colts, who started 1-4 (then 1-5) before making it in and advancing to the divisional round. The loss would not be crushing, but a win would be outstanding.

The Raiders won six straight games at Arrowhead from 2007 to 2012, so set aside any thinking that there’s mysticism in traveling to Kansas City. The Chiefs are 13-3 at home with Patrick Mahomes, but 15-4 on the road; Mahomes is actually somewhat better on the road on average.

Kansas City is 13-1 within the division as Mahomes as the starter however, so any time an AFC West team can put a dent in that record, it’s a good thing. Las Vegas has a two week break after this and then a primetime non-conference game against Tom Brady, so it would be a better feeling for the team to know that they’re definitely still in play for the division and not just looking to survive in the wild card.

Don’t get caught up in the record, though. Teams play 16 games, they win some and lose some, and the order of those outcomes might as well be random.

While it could be another year or two before the Raiders really reap the benefits of Ruggs and Edwards, there’s an even more exciting development on the defensive side of the ball: there are almost too many good, young players for it not to be at least semi-successful in the future.

The most interesting 27-and-under players on defense who are signed through at least next season include Cory Littleton and Nick Kwiatkoski (the only ones over 25), Maliek Collins and Maurice Hurst at defensive tackle, Maxx Crosby and Clelin Ferrell at defensive end, and Johnathan Abram, Trayvon Mullen and Damon Arnette in the secondary.

I mention these players, and not Amik Robertson, Arden Key, Raekwon McMillan, Isaiah Johnson and Tanner Muse only because the other nine listed have already proven or flashed value at the NFL level. There’s something disingenuous about it when someone tweets out a list of “look at all these players under contract for the next three years!” because in reality these situations are impossible to predict and plans go awry every season.

However in this case, Mullen has been one of the best corners in the first quarter of 2020 and injuries have held back a few of these players — Abram, Arnette, Kwiatkoski — after they had already shown abilities that would really help the Raiders moving forward. Almost all of them need more development time on the field and in the case of veterans like Littleton and Collins, potentially improvements could come in a snap given their experience and quality of play with other organizations.

Raiders’ Trayvon Mullen has taken a massive step forward this year, especially when given the opportunity to work from press.

Mullen ranks 4th in yards allowed per coverage snap (0.66) and has three PBUs in press through Week 4.

The Raiders haven’t had a defense ranked in the top-10 in points allowed since 2002 and they’ve only been top-10 in yards allowed once over the last 21 years, but if Paul Guenther is still the defensive coordinator in 2021 and Las Vegas doesn’t finish in that general area, something must have gone terribly wrong. The talent is there.