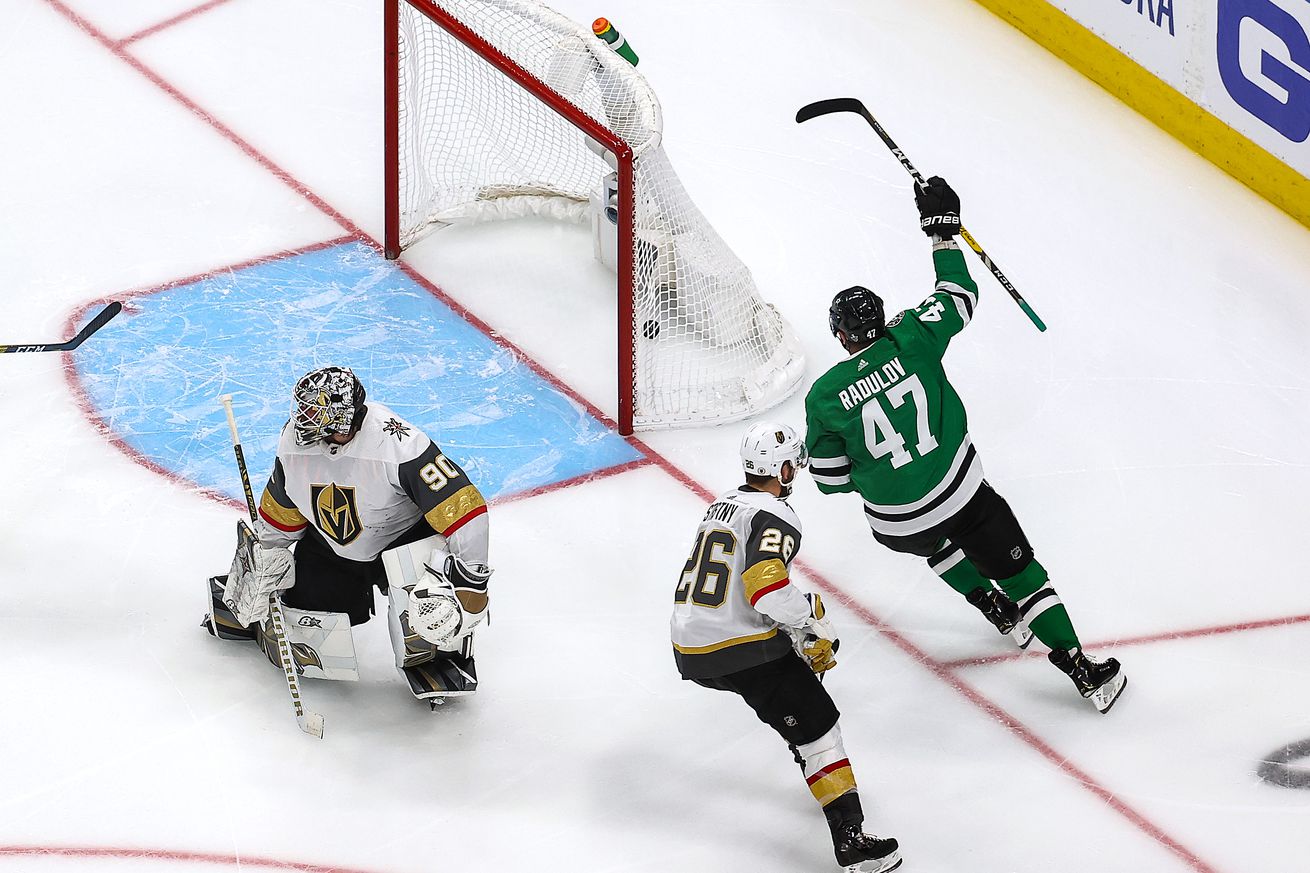 The Vegas Golden Knights fought back from two one-goal deficits but ultimately fell 3-2 in overtime against the Dallas Stars in Game 3 of the Western Conference Final Thursday night in Edmonton.

Alexander Radulov scored just 31 seconds into extra time to give the Stars a 2-1 lead in the best-of-seven series.

The first two periods featured chances for both sides but, in the end, a whole lot of nothing, with Vegas holding the edge in play in the first and Dallas re-claiming it in the second. It seemed as though it would remain scoreless through 40 minutes.

That is, until Jamie Oleksiak, the hulking defenseman, opened the scoring on an unlikely breakaway with less than 17 seconds left in the frame.

A blocked shot and an untimely stumble left the Knights vulnerable, and Oleksiak banked it off Robin Lehner‘s pad and into the net.

The deflating goal was Dallas’ first since 2:36 of the first period of Game 1, and it snapped Lehner’s shutout streak at over 170 minutes.

It was shaping up to be one of those games.

Just minutes into the third, however, a fortuitous 5-on-3 power play gave Vegas a chance to reset.

While Shea Theodore rang iron in the first part of the man-advantage, he later found twine with his seventh of the postseason, evening up the game at 1-1. Theodore’s knack for clutch goals continues, and this one sparked a dominant effort by Vegas in the third.

Even so, less than four minutes after Theodore potted the equalizer, Jamie Benn gave the Stars their second lead of the night. It was an uncharacteristically soft goal for Lehner to surrender, as a seemingly harmless shot beat him five-hole.

But the Knights later answered when Alex Tuch scored his team-high ninth goal at 12:46 of the third.

Dallas challenged the play for goaltender interference, but Mark Stone’s contact with Anton Khudobin was deemed legal, and the goal stood. Vegas was unable to convert on the ensuing power play, but that didn’t stop the Knights from getting the puck to the net.

Vegas had several incredible opportunities to take the lead, but Khudobin stood tall (and wide) in net for the Stars, making great pad saves and robbing the Knights multiple times to keep it a 2-2 game.

Dobby save on Karlsson #GoStars
Lehner save on Benn #VegasBorn pic.twitter.com/McYYEB16jb

Lehner made some fantastic stops of his own, including one in the final seconds of regulation when Dallas set up an impromptu 3-on-1.

Absolutely incredible how this did not end the game.#VegasBorn #GoStars pic.twitter.com/mugV8OYjWC

Benn had Radulov open on the far side but decided to take the shot himself; Lehner was up to the challenge, though, and helped Vegas get to extra time.

However, Radulov made no mistake with his game-winner on the first shift of overtime, stunning Vegas with a 3-2 loss.

It was over before the Knights had a chance to make a statement; that will be left for Game 4.

Khudobin finished the game with 38 saves on 40 shots for a .950 save percentage. It looked like he and Lehner were injured late in the third, but both started the overtime period. Lehner made 20 stops on 23 shots on the night, including this one.

Though both goalies appeared to be fine, both teams did lose a player to apparent hand/arm injuries during the game. Tomas Nosek left and did not return following a collision with Andrej Sekera in the second period, while Radek Faksa exited in the third after running into Tuch. It’s unclear if either will be available for Game 4.

Though Theodore and Tuch found the net, William Karlsson had a particularly strong game, even if he came up empty. He was stopped by Khudobin on multiple high-danger scoring chances and was first on the team with 0.43 individual expected goals at 5-on-5.

But it was another instance where Vegas was the better team but did not lead where it counted. The Knights outshot Dallas 40-23 and held a 73-44 edge in Corsi, but it wasn’t enough to take their first lead of the series.

Instead, they’ll look to even things up once again in Game 4 on Saturday night.