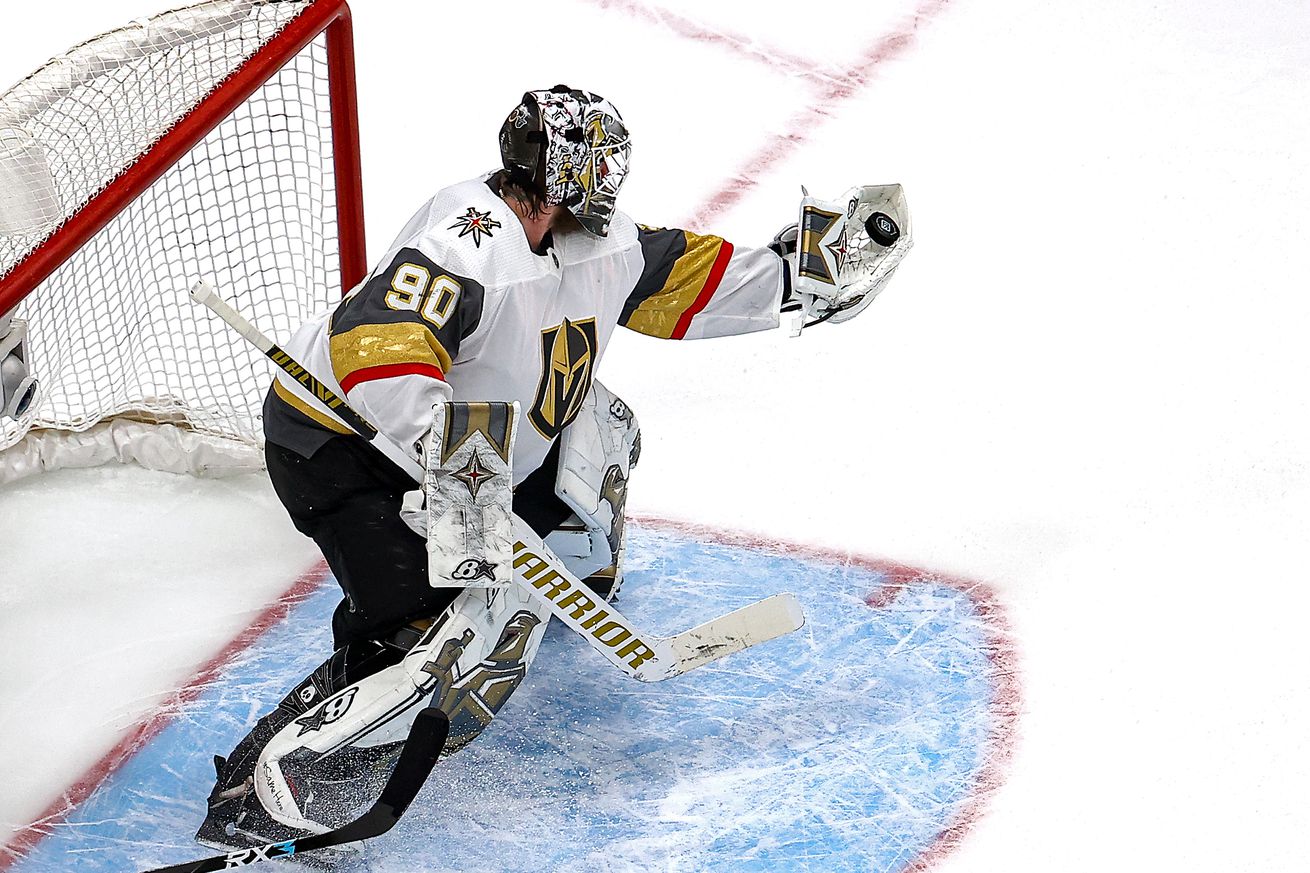 After his second shutout this series, Lehner’s performance opens the door for playing on Sunday.

Robin Lehner hasn’t faced a lot of shots in the Edmonton bubble.

Entering Saturday, Lehner saw 30 shots in a game only one time; dating back to the round-robin finale against the Avalanche (32 saves on 35 shots).

Saturday was Lehner’s busiest night of the Stanley Cup Playoffs and he delivered, stopping all 31 shots from the Vancouver Canucks to give the Golden Knights a 3-0 win in Game 3 of their second round series, pushing Vegas to a 2-1 series lead.

Game 4 is Sunday, a back-to-back that was moved up after the NHL postponed games Thursday and Friday to observe heightened awareness toward police brutality and systemic racism.

“They came out hard in Game 2. We obviously didn’t have our best game,” Lehner said regarding the Knights’ 5-2 loss in Game 2. “This group has a lot of belief. I knew before the game we were going to have a good game.”

Lehner has started all but two of the Golden Knights’ playoff games and has put the club two wins from their second trip to the Western Conference Final in three seasons. And while coach Peter DeBoer has said he planned on rotating between Lehner and Marc-Andre Fleury through this playoff run, that hasn’t happened. Lehner is 7-2 this postseason with a 2.08 goals-against average and .921 save percentage with two shutouts, both coming in this series.

Conventional wisdom dictates this would be an ideal situation to roll with Fleury. Vegas did that in the first round against the Blackhawks; Fleury made 26 saves in Game 3, a 2-1 win, to give Vegas a 3-0 series lead. Lehner allowed two goals in Game 4, a 3-1 loss before closing the door in Game 5.

But Lehner getting the call Sunday is not farfetched. Again, Lehner’s 32 saves are the most he’s made in a game in the bubble. Half of them came in the first period, and nine of them were on the power play. That included a 5-on-3 for 1:13.

Vancouver mustered 16 more shots in the final 40 minutes; he worked with a two-goal lead after two periods and had an easy night the rest of the way.

“We could tell early tonight that he was good. He looked a lot like Game 1,” DeBoer said. “For a goalie, if you ask him, it’s probably nice to have some shots early and get a feel for the puck. While we didn’t like the penalties, he probably liked to have some early action.”

The Golden Knights are no stranger to playing the same goalie on back-to-back nights. Fleury has done it three times with Vegas and is 3-0 in the SEGABABA (second game of a back-to-back). He’s 5-1 overall in those six games. Fleury posted consecutive shutouts on Nov. 23-24, 2018, against the Calgary Flames and San Jose Sharks. Both of those games were at T-Mobile Arena.

There’s no travel involved in the bubble, so it’s almost a makeshift home game for Lehner should DeBoer want to go with the hot hand. In his career, however, the numbers don’t look appealing to Lehner playing the SEGABABA.

Here is Robin Lehner’s career appearances in a SEGABABA after starting the first leg of the back-to-back. Remember the teams he used to play for.#VegasBorn pic.twitter.com/ggBOzADYou

Some things to keep in mind of these numbers: The majority of these games came as a member of the Ottawa Senators and Buffalo Sabres. The three games in the 2013-14 season came when Lehner was a 22-year-old backup to Craig Anderson on an Ottawa team that did not make the playoffs. The following four were with the Sabres in the midst of their nine-season playoff drought.

The shutout at the end came last season as a member of the New York Islanders, in which he was a Vezina Trophy finalist.

In short, don’t judge the player. Lehner is a much better goalie than what he was and Vegas is a much better team than those listed. If DeBoer thinks Lehner gives the Golden Knights the best chance to put a stranglehold on this series, it shouldn’t be out of the realm of possibility to think he would play him on both nights.

“I thought he was our best player for the first 10 minutes,” DeBoer said.

As for what this means for Fleury, his agent Allan Walsh could very well make another photo where a bigger sword — one the size of Excalibur — could pierce his client in the back. Fleury is 18-11 with a 2.37 goals-against average and .920 save percentage with Vegas in the playoffs. If he gets into a game, he’s very capable of getting the job done.

Given how this postseason has gone, nothing is certain. The facts remain the Golden Knights are 9-2 this playoff and can put Vancouver on the brink of elimination with a win tonight.

“Our guys are excited to play tomorrow. I know that,” said Canucks coach Travis Green. “We had a lot of energy in our game tonight. Life in the bubble isn’t bad. I hope we’re here for quite a while. We’ll be fine, we’ll be ready to go.”