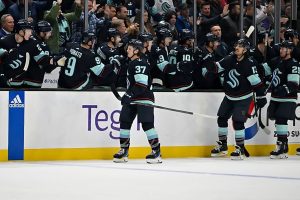 The NHL season is rolling along full steam ahead; teams have now played past the season’s quarter mark. Some teams had played just as expected when the puck dropped for the new season. However, other teams have been surprising by either overachieving or underachieving through the league’s first quarter. Today we look at the performance and storylines of the teams in the NHL Pacific Division.

One of the biggest surprises of the NHL Pacific Division through the first quarter of the season is the impressive play of the Seattle Kraken. After an October that saw the Kraken lose four of their first five games of the season, Seattle had a stellar month of November, catapulting them up the Pacific standings. With a 10-1-1 record in November, Seattle has exceeded expectations up to this point in the season.

Offence Throughout the Roster

Seattle has been getting good offensive production throughout their lineup. New addition and two-time Stanley Cup champion Andre Burakovsky leads the team with 25 points in 24 games. However, not one player jumps off the roster at a superstar level. Rookie forward Matty Beniers has himself in the Calder Trophy conversation and has ten goals and 11 assists to begin his first NHL season.

The Kraken’s powerplay has been clicking at a 26% success rate, good for eighth best in the league. Seattle also has the best shooting percentage in the league, converting on 12.6% of their shots.

Questions Between the Pipes

Like many teams around the NHL, Seattle’s goaltending is questionable at best. However, Martin Jones has run away with the starting job. Jones has won his last five starts, although he has benefitted from Seattle’s scoring touch. He has allowed 21 goals over the five wins, which is not the type of goaltending that produces long-term wins. Jones has a 2.90 GAA and a .893 SV% this season, while his counterpart Philipp Grubauer boasts a 3.40 GAA and a .868 SV%.

While Seattle has played themselves in playoff consideration, it’s hard to believe the cinderella run will continue for the entire season. Their schedule arguably has been on their side, and the competition gets stiffer for the Kraken from here on out. Expect Seattle to regress as the season continues. However, they will be among the teams battling for a playoff spot coming out of the Pacific.

Like their cross-state rivals Anaheim Ducks, the San Jose Sharks appear to be on course for the draft lottery sweepstakes. The Sharks have lost their identity over the past couple of seasons, losing aging veterans from their contending years. As a result, there has been little direction toward regaining that consistent playoff form fans had become so used to. However, the re-emergence of superstar-level play from defenceman Erik Karlsson, who is locked up long-term, has been a bright spot for this tame Sharks squad.

Aside from their core four of Karlsson, Tomas Hertl, Logan Couture, and Timo Meier, San Jose has difficulty mustering any offence. The four have combined to score 35 goals for the Sharks, and the rest of the roster has added 33 goals. The lack of depth scoring doesn’t bode well for the team and shows no signs of turning things around this season.

While the lack of scoring is one reason the Sharks often find themselves in the losing column, they also have difficulties keeping the puck out of their net. As a result, San Jose allows 3.48 goals per game, which is not good enough.

Drawing comparisons again to their California counterparts, the Sharks may be best to wash this season and hope they can re-tool quickly with a strong draft year coming this summer. A potential trade of the resurgent Erik Karlsson will land them some excellent prospects and help them stockpile draft picks. However, moving Karlsson’s contract will be challenging, and the Sharks would likely need to retain some cap in such a move. San Jose will have a battle for last place in the Pacific.

The Vancouver Canucks have had a bit of everything going through the NHL’s first quarter. Beginning the season with a seven-game losing streak was less than ideal for a squad with playoff ambitions before the season’s puck drop. Since the losing streak, the Canucks have posted a 10-7-1 record. Vancouver has also endured their share of controversy as head coach Bruce Boudreau may be in the hot seat, and trade rumours are also swirling around this roster. Brock Boeser‘s name is the latest blowing around the trade winds. Bo Horvat is set to become an unrestricted free agent at the season’s end, and his future with the Canucks is not set in stone.

While the Canucks are pretty efficient regarding the offensive side of the game, their defence has holes that need to be addressed if this team is going to contend for a playoff spot. The Canucks penalty kill sits 29th in the league, successfully killing 67.5% of the opponent’s powerplay chances. Vancouver also allows 3.76 goals against per game, which ranks 30th across the NHL. To make matters worse, starting goaltender Thatcher Demko is expected to miss the next six weeks due to injury. The Canucks don’t have depth on the blueline to be a contender in the NHL Pacific Division.

Despite solid play offensively from Elias Pettersson, Horvat, J.T Miller, and Quinn Hughes, the Canucks outlook for the rest of the season isn’t great. The next six weeks will be challenging to remain somewhat close to a playoff position without their number-one netminder. Unless Boeser is moved, and though his value is not as high as it once was for a bonafide top-four defenceman, the Canucks will continue to struggle. Until they can shore up their blueline and get their forwards playing a complete 200-foot game, this team will not excel. So expect the Canucks to remain outside looking in as the playoff races begin to take shape.

Through the NHL first quarter, the Vegas Golden Knights surged to the top of the Western Conference under new head coach Bruce Cassidy. Cassidy’s systems have the Golden Knights scoring plenty of goals and giving up very few. The team has excelled under the new head coach led by none other than the resurgence of Jack Eichel. Eichel’s first entire season in Vegas has started off well; the 2015 2nd overall draft pick has 13 goals and 16 assists for 29 points in 26 games. In addition, defenceman Alex Pietrangelo and Veteran forward Mark Stone have also rediscovered their games after disappointing seasons last year.

The goaltending situation for Vegas had some uncertainty after it was announced that Robin Lehner would miss the season in its entirety due to hip surgery. Fortunately for the Golden Knights, the tandem of Logan Thompson and Adin Hill have been up to the task at hand. Thompson, a rookie goaltender, has taken the starting role putting up an impressive 12-5-0 record. He has a 2.53 GAA and a .920 SV%, and there is little reason to believe with his stellar play that he shouldn’t receive some consideration for the Calder Trophy this year. Hill has been equally impressive with a 6-2-1 re, within a 2.55 GAA and a .906 SV%.

From the outside perspective, Cassidy has the entire roster buying into his coaching tactics. Vegas is getting plenty of supplemental offence throughout their line up and the defence has no problem getting involved to push the play. In addition, the Golden Knights have been the most disciplined team in the league averaging just 6.2 penalty minutes per game.

Vegas is the team to beat in the Pacific division. They are getting the most from their entire roster with no huge weaknesses. Expect Vegas to remain on top of the division as they continue to excel, seeking a return to playoff action after missing the post-season last year. With them, we end the first quarter analysis of the NHL Pacific Division.