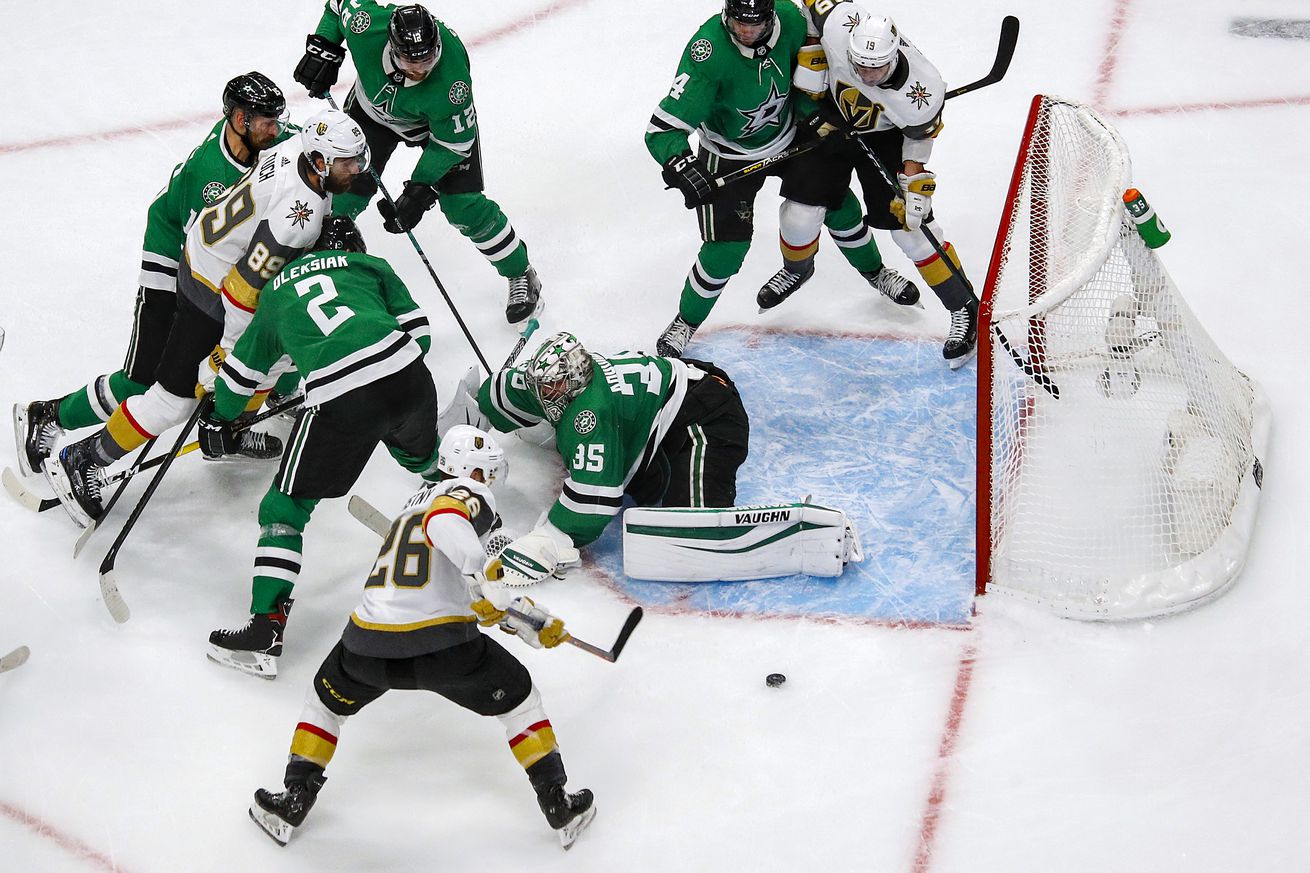 To say this is a must-win might be an understatement.

The Vegas Golden Knights are down one game in the Western Conference Final … again. Their shutout of the Dallas Stars spurred a Game 3 win for the opponent, and while Vegas brought it to Dallas in the first and third periods, they didn’t get a complete game effort.

Part of that is the neutral zone: Vegas had problems moving the puck up the ice and gaining entry to the offensive zone. That’s something the Golden Knights will need to address to win Game 4. But it’s not where the problems stopped.

Robin Lehner let in three goals from shots that could have been saved. Even on the Jamie Oleksiak goal that started the scoring, Lehner stopped part of that puck but not all of it. The Golden Knights will need more from him in Game 4.

Especially as Anton Khudobin had a good game at the other end at Game 3. He made 38 saves on 40 shots and saved 1.79 goals above expected. Vegas needs to get better quality of shots on him, as they instead opted for quantity in Game 3 (their streak of 40-shot losses continued).

Dallas has forced Vegas into playing their style of game two games out of three. They’ve won both times.

Here are the keys to winning Game 4 for the Golden Knights.

In four games against the Stars this postseason the Golden Knights have played exactly one good second period. That was in Game 2 when they scored three goals, but that wasn’t even the best period of the game for them (statistically). Vegas has struggled mightily in the middle frame against Dallas.

You can point solely to the second period and say “here’s the problem boys” more clearly than any other problem for Vegas. Dallas has scored four goals in four games in the middle frame. They have one in four in the other two (two in three periods, if you include 31 seconds of overtime, coincidentally the only other even-numbered period. Always take the odds, folks).

Giveaways are haunting Vegas so far in this series. It’s been something the Golden Knights have been prone to in the postseason against Dallas as well. They gave up 12 giveaways to Dallas in the round robin and proceeded that with 22 in Game 1, nine in Game 2, and 12 in Game 3.

Something may have been noticed in that string: their one game in the single digits was the Western Conference Final game they won. See, that’s likely not a fluke. Against the Stars (and throughout much of the playoffs) giveaways have led to bad chances against. Especially giveaways in the Knights’ own end (or close to it). Reducing them means better defense.

That should start with Vegas’s defensemen. Nate Schmidt and Shea Theodore lead the blue line in 5-on-5 takeaways against Dallas (each having two) but also lead in giveaways (Theodore with four, Schmidt with three). Their partners haven’t been great either, as Alec Martinez has two and Brayden McNabb has one. That’s 10 giveaways from your top 4 defensemen.

Mark Stone’s giveaway led to Oleksiak’s breakaway goal in Game 3 as well. Don’t think that forwards are spared from this. But giveaways must be reduced if Vegas is going to come back in this series.

Look, watching the goal from overtime in Game 3 back it’s very clear how bad a play Brayden McNabb and Nate Schmidt made on that goal. Neither of them is the one covering Alexander Radulov on his shot, but one of them absolutely should be.

Pete DeBoer should also stop starting them, especially in overtime. The Golden Knights should be going for the early goal themselves. That means Alec Martinez and Shea Theodore starting.

But the whole defense can be better. McNabb is the only defenseman with a point at 5-on-5 (a secondary assist) against Dallas. Nick Holden hasn’t scored a point since the round robin (also a secondary assist).

Martinez and Theodore have the worst possession numbers of the three defensive units at 5-on-5 so far in the series. That’s with the highest offensive zone start percentage. They’ve also allowed a high-danger goal and Theodore was on ice for the goal against in Game 1.

McNabb and Schmidt have yet to allow a high-danger goal (both the Alex Radulov shot and the Jamie Benn goal, although they could make better plays on each, are ultimately on Lehner). They shouldn’t be too comfortable though, given their history (they’ve also given up the most goals against in this series).

It may be time to see different defensemen, or different combinations. Nicolas Hague is in the bubble (as is Jon Merrill). Hague had a good regular season for the Golden Knights and Merrill has already played a game in the playoffs for Vegas.