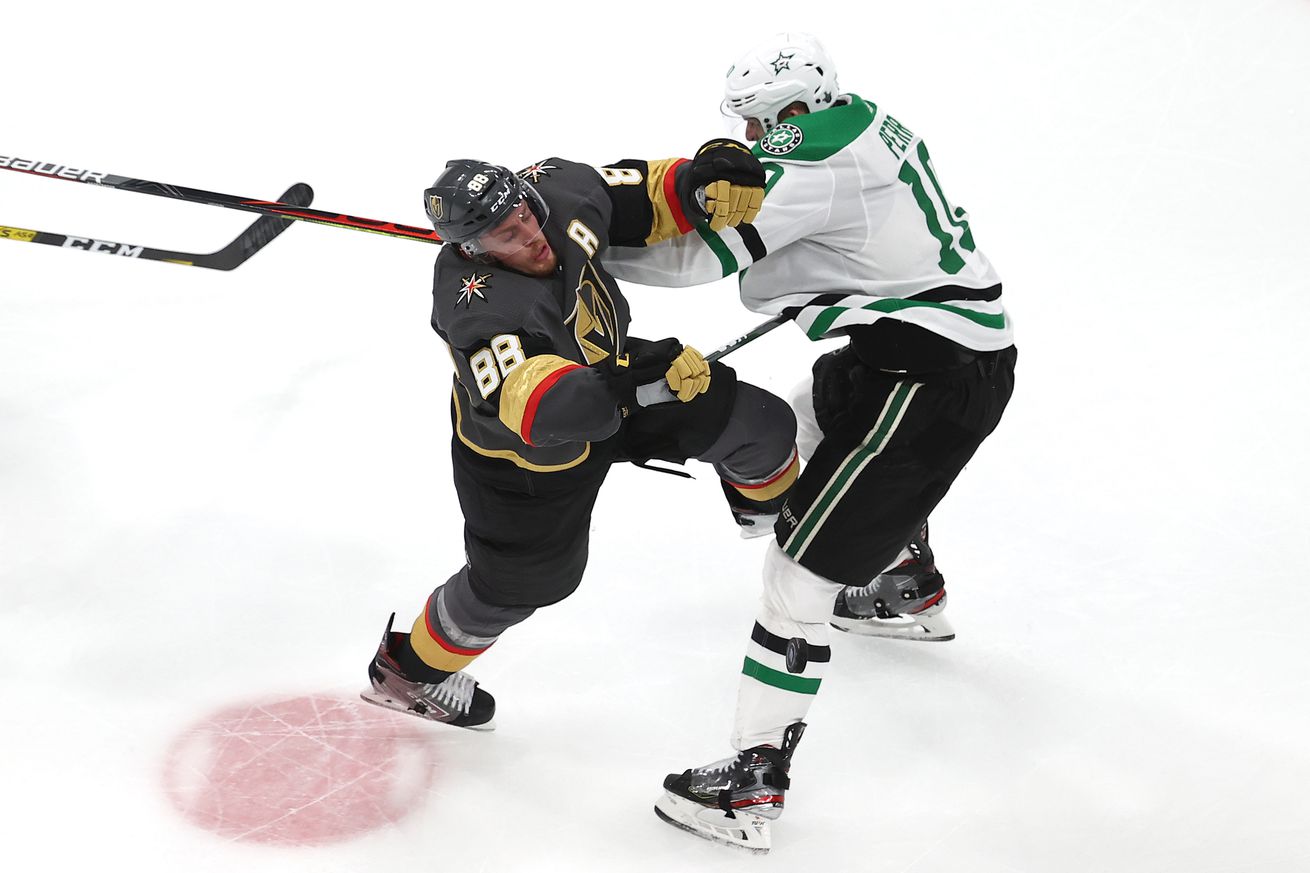 The Knights are 3-2 in five road games during the playoffs.

The Vegas Golden Knights and Dallas Stars will clash for Game 3 of the Western Conference Final tonight in Edmonton.

So far, both teams have had one dominant performance, and that’s why the series is now tied at 1-1.

In Game 1, it was all Dallas, and Vegas looked lost. In Game 2, however, the roles were reversed; Dallas didn’t quite look lost, but it was certainly all Vegas. The Knights had a particularly strong second period, scoring three goals in the span of nine minutes and 39 seconds.

Paul Stastny, William Karlsson and Tomas Nosek gave Vegas its first three goals of the series, and Robin Lehner took care of business at the other end of the rink with a 24-save shutout, his fourth shutout in the last two rounds.

Through two games, Marc-Andre Fleury and Lehner have combined for a .980 save percentage against Dallas.

The Golden Knights know what it’s like to get stuck in a frustrating performance, and that’s something that Dallas experienced for the first time in a while Tuesday night in Game 2.

The Stars took unnecessary penalties at least three times in Game 2, combining for 14 penalty minutes in the contest. Jamie Benn and Alexander Radulov, two of the team’s stars (pun intended), were both guilty of this on at least one occasion.

If Vegas can keep Dallas’ top performers frustrated and distracted, that’ll only help the Knights as they look to take a 2-1 lead in this series. Plus, if that frustration turns into power plays for the Knights, even better.

Speaking of power plays, the Golden Knights need a strong performance out of their special teams tonight in Game 3 and moving forward.

The Knights’ power play only scored on one of six opportunities (one of which was a double-minor called in the final 1:12 of regulation).

Technically, the team got another one past Anton Khudobin on the power play, though the goal was reversed due to incidental contact in the crease. That being said, the power play looked significantly more effective in Game 2 than it had in a while.

Passing was crisp and tape-to-tape, hesitancy with the puck was a thing of the past, and scoring chances were plentiful. Vegas finished with 21 Corsi at 5-on-4 (compared to 6 in Game 1). Granted, the Knights had more time on the power play in Game 2, but not enough to explain away the 15-point difference.

The Knights are now 1-for-10 in the series. That’s not good enough, but the top unit’s progress in Game 2 was promising. The Knights need to take advantage of their advantages, especially in what could turn out to be a very tight series.

On the flip side, the Knights’ penalty kill needs to continue to be elite moving forward.

Vegas is 4-for-4 so far this series, but Dallas’ power play can be lethal and is a game-changer. In fact, the Stars are tied with Colorado for the most power-play goals this postseason. But since the start of the actual playoffs, Dallas leads the way with 14 and is first in the league in power-play efficiency, operating at a 29.2 percent success rate.

The Knights cannot afford to play undisciplined hockey, but if they do find themselves shorthanded, the penalty kill will be crucial.

No matter what, Vegas needs to continue to limit Dallas’ offense.

Interestingly, Dallas had trouble scoring all year. The club finished 26th in the league in goals per game (2.58) in the regular season, which was the second-lowest rate among the 24 qualifying teams (only Columbus managed a very slightly lower rate of 2.57).

That hasn’t been the case in the playoffs.

Since the start of round one, the Stars have maintained the third-highest goals-per-game rate (3.33), trailing only Tampa Bay (3.73) and Colorado (4.25). By contrast, Vegas is eighth (and last among the final four teams) with an average of 2.64.

In the first and second rounds, the Stars potted a combined 48 goals, 28 of which came in the seven-game series against Colorado.

Since the start of the Western Conference Final, however, the Stars have just one goal in two games.

The Knights need to make sure to keep it that way.

It’s unrealistic to assume Vegas can keep Dallas off the scoresheet for the rest of the series, but the last thing the Knights want to do is give the Stars a reason to regain their offensive confidence and get the ball rolling once again. That offense has scored at least five goals seven times since the start of the playoffs.

There’s no reason to assume that that would happen in this series given the way Vegas has dominated possession throughout the postseason and especially because of the way both Fleury and Lehner have performed. But that doesn’t mean Vegas should give Dallas any opportunities to rediscover its offensive swagger.