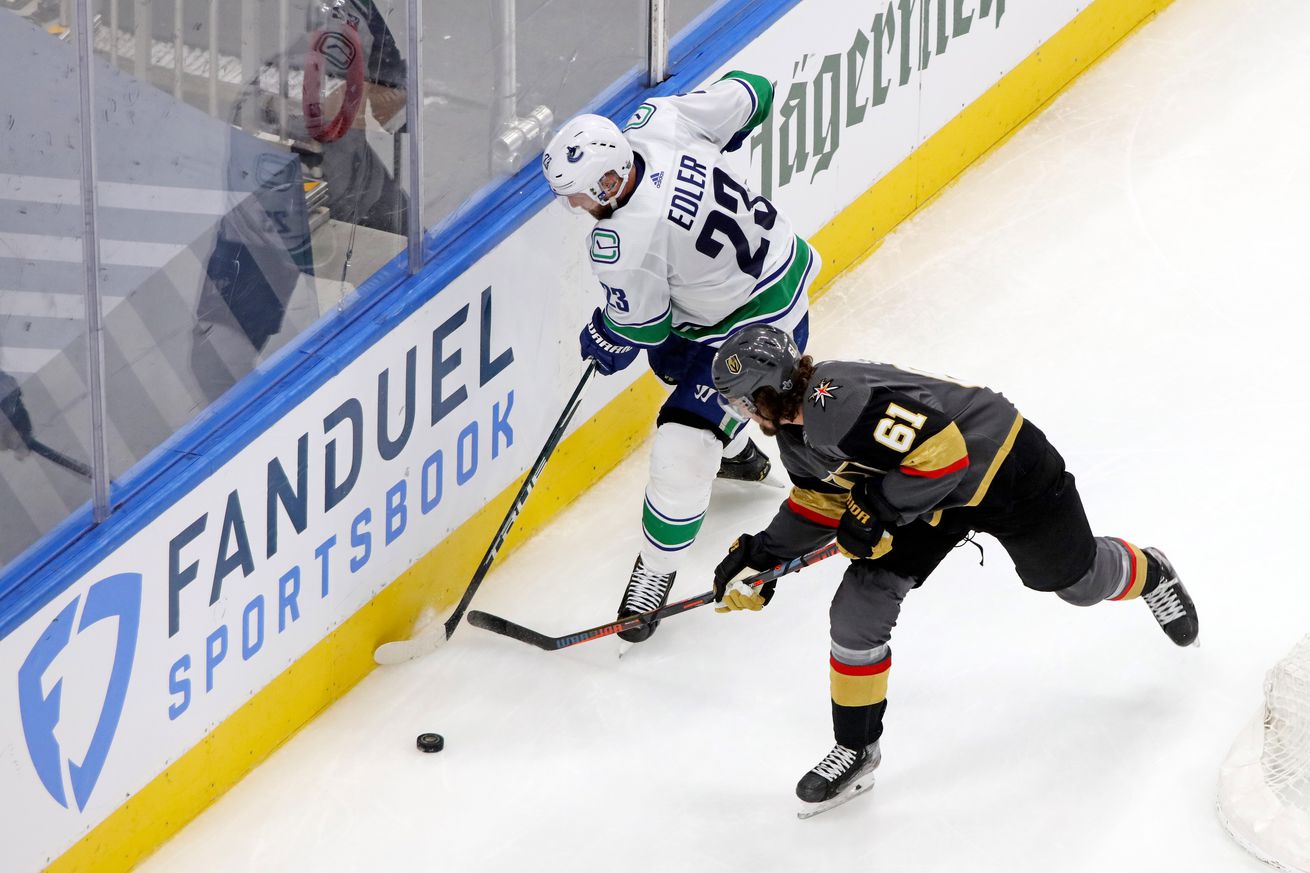 After a 5-2 loss, the Golden Knights are eager to right the ship in Game 3.

The National Hockey League will resume play today after postponing games from Thursday and Friday as part of a player-led initiative to stand in solidarity with other sports leagues in an effort to raise awareness about systemic racism. Games 3 and 4 in the second-round series between the Vegas Golden Knights and Vancouver Canucks have been rescheduled for tonight and tomorrow night.

The Canucks evened up the best-of-seven series at 1-1 with a 5-2 win in Game 2 back on Tuesday night; it was the worst the Knights have looked all postseason, even though they still dominated possession and were robbed multiple times by Canucks netminder Jacob Markstrom.

Vegas’ defense contributed heavily to the unfavorable outcome, with several key breakdowns leading to goals against. Part of the struggle on defense was a result of Vancouver’s speed throughout the game, especially in the first period. Vegas will need to match that speed going forward; they have the assets to do so.

The Canucks had two goals in the first period and two in the third in the 5-2 win, while the Golden Knights scored six minutes into the middle frame and again very late in the third.

Tyler Toffoli was in the lineup for the first time since Vancouver’s first game against the Minnesota Wild in the qualifying round. Toffoli was a huge force behind Vancouver’s success the other night, putting up three points, including the opening goal just 1:29 into the contest. He’ll likely remain on the first line with Elias Pettersson (and Tanner Pearson), as those two demonstrated clear chemistry.

That was also Vancouver’s best line as they put up a 60.87 percent Corsi and 72.36 percent expected goal share. The Vegas defense will need to focus on shutting them down, although the Knights will have to do so without last change as home-ice advantage shifts to Vancouver for the next two games.

The Golden Knights will need to bring their “A” game as they look to take a 2-1 series lead. Here are three keys to success for Vegas in tonight’s tilt.

Clean up the defense

Defensive breakdowns have cost the Golden Knights throughout the postseason, especially in the first two rounds of the playoffs. Giving up high-danger goals has been a weakness for the Brayden McNabb and Nate Schmidt pairing in particular, as they gave up five in the first-round series against Chicago.

They allowed two more in Game 2 against Vancouver, both of which were preventable. It was the same story as in Game 5 against the Blackhawks, though this may have been the worst of the seven goals as the Knights allowed two Canucks players to set up shop in front of Lehner behind the play.

That is not an ideal use of the hockey game.#VegasBorn pic.twitter.com/vJw7idsDhZ

But those two weren’t the only ones who made mistakes on defense. The penalty kill gave up a goal just seven seconds into a Canucks power play, and Alec Martinez left Toffoli wide open for an easy backdoor goal.

These kinds of mistakes are completely avoidable, and the Knights need to do just that going forward, starting tonight.

Lay off the penalties

Discipline wasn’t an issue for the Golden Knights through much of the postseason. In fact, since the official playoffs started (after the qualifying round) on Aug. 11, Vegas has the third-fewest penalty minutes with just 38.

But it was a problem in Game 2. Vegas took five penalties and played 8:07 shorthanded against Vancouver, giving up a goal in the first seven seconds of the Canucks’ first power play of the game. Vancouver has the sixth-best power play in the postseason, converting at a 25 percent clip. That’s after maintaining the fourth-best mark in the regular season with a 24.2 percent clip.

It’s pretty simple; Vegas can’t take that many penalties against Vancouver and expect to win. One of the main reasons Vancouver was able to mount a 2-0 lead so quickly in Game 2 (after which the game was essentially over) was a bad penalty by William Carrier.

The Knights need to stay disciplined in Game 3 and draw more penalties than they take.

Find a way to score

The Golden Knights produced just two goals in Game 2 despite generating more shot attempts (93 vs. 73) and more shots (40 vs. 39) than they did in Game 1. They produced a greater quantity of shot attempts but not a greater quality, as they saw the same number of high-danger chances (14) but fewer expected goals (3.38 vs. 3.49).

Those quality numbers need to go back up, especially on the power play. The Golden Knights, in more than a minute more on the man advantage in Game 2 vs. Game 1, generated the same number of high-danger chances and just .04 more expected goals (going from .87 to .91).

One of the problems Vegas ran into in the second contest was Vancouver’s shot-blocking prowess. The Canucks blocked 21 shots in Game 1 but managed to get in front of 40 pucks in Game 2, 30 of which were at 5-on-5.

When Vancouver is able to stack bodies in front of the net, it prevents the Knights from capitalizing on sustained pressure. The Knights need to adjust accordingly.

They need to be more selective with their shots and elect for chances closer to the net, and they need to move the puck around more to open up shooting lanes. At the end of the day, Vegas needs to do whatever it has to do to break through the defensive wall the Canucks set up in front of Markstrom.