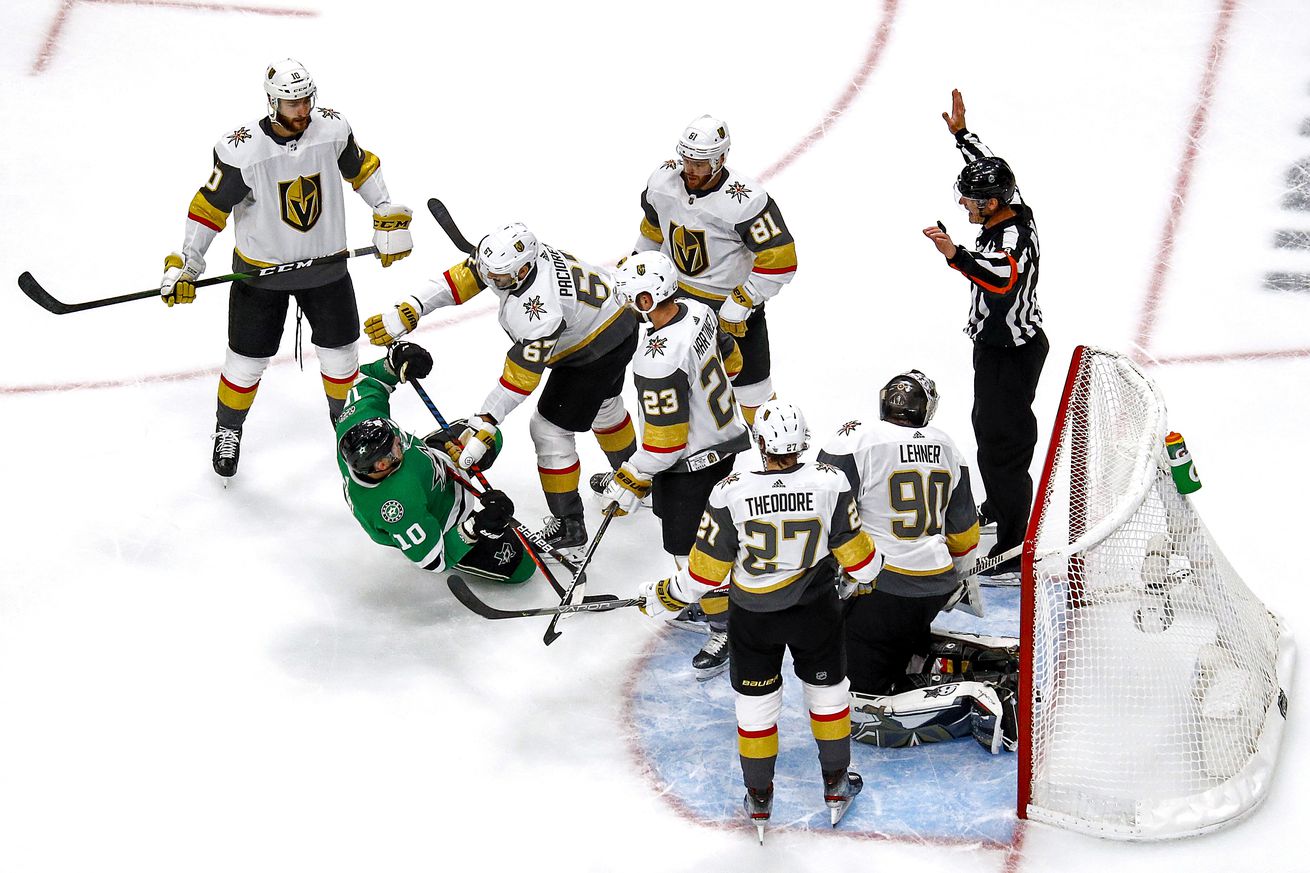 Vegas is one loss from a promising playoff run coming to an end with a loud thud.

The script couldn’t have been written any better in the Vegas Golden Knights’ favor through the first 28 minutes of Game 4.

Alec Martinez scores on the power play 7:44 into the second period. The Golden Knights are tripling the Dallas Stars in shots on goal. The team that scored first in every game to this point went on to win.

But it took one knuckler from Joe Pavelski and Jamie Benn ending Vegas’ string of dominant penalty killing to put the Golden Knights one loss away from leaving the Edmonton bubble without any hardware.

The Stars won 2-1 at Rogers Place on Saturday in Game 4 of the Western Conference Final, putting them one win from their first Cup Final appearance in 20 years. The Golden Knights, meanwhile, don’t have a lot of time to find answers. Game 5 is Monday and what was once a promising Stanley Cup Playoffs run could go up in smoke in 48 hours.

“There’s a sense of urgency with where we are in the series, but we’ve got to stay positive,” said forward Reilly Smith.

This series has been predicated by a number of consistent factors: The Golden Knights continue to lead in the shot department — 33-20 on goal, 68-38 in attempts — offensive zone time, and scoring chances (16-14).

But it took two bounces for the Stars to rally and put Vegas on the brink of elimination. After Martinez’s second goal of the playoffs gave Vegas a 1-0 lead, a Nate Schmidt turnover saw the puck land at Pavelski’s stick, Schmidt got a deflection on Pavelski’s shot but a funky curve got it past Robin Lehner to tie the game.

Then on the power play, where the Golden Knights had killed 22 straight penalties, Benn put an end to that streak 11 seconds in when he corralled a rebound and beat Lehner to give Dallas the lead — the first lead change of the series.

Once the Stars took the lead, much like in Game 1, they parked the bus and took away space for the Golden Knights in the offensive zone. Vegas had four shots in the first 13:32 of the third period after 24 through the first 40 minutes.

“They play a really strong defensive game,. Obviously they’re getting really good goaltending, too,” Martinez said. “They do a good job at protecting leads. They deny a lot of entries into the zone, they clog up the neutral zone and pack it in the d-zone. We’ve got to find a way to get through that.”

This isn’t to say the Golden Knights didn’t have their chances. Much like in Game 3, Vegas had plenty of power play time to work with. And for the second game in a row, the Golden Knights were gifted more than a minute of 5-on-3 time with 5:54 remaining.

Vegas had five shots on goal with none of them beating Anton Khudobin, who made 32 saves one game after making 38 stops in the 3-2 overtime victory for Dallas in Game 4.

The Golden Knights haven’t been able to get traffic in front of Khudobin. Ten of Vegas’ 16 scoring chances came from the point or outside the faceoff circle. The other six came near the crease, but the Knights missed five from within 5-20 feet.

“I thought we made a better effort to get there,” coach Peter DeBoer said. “Obviously, with one goal, we’ve got to find other ways to make it tougher on him, but the effort is there. Just got to stick with it.”

Lehner made 18 saves; another night where the Vegas goalie didn’t see a lot of action but wasn’t the detriment to his team losing. It’s the second time in as many weeks he’s lost consecutive starts, but the offense in front of him continues to be cold no matter which goalie they face. Dating back to Game 5 of the Vancouver Canucks series, the Golden Knights have 10 total goals in seven games.

Four of them each came on the power play and 5-on-5, while two were with an empty net. Four of them have come from defensemen, but three from Shea Theodore.

In the previous 12 games, the Golden Knights had 45 goals.

“Forwards, I think we’re trying to get to the net. It seems like a mad scramble and we’re not finding loose pucks,” said Smith. “As a forward group, we’ve got to do a better job at finding some of those pucks and scoring timely goals. We can’t rely on our defense to score for us every single night.

“It seems like the puck is bouncing every way but in the net.”

If any DeBoer-coached team in the past 24 months has taught us anything, it’s that a series at 3-1 isn’t over until the other team says so. The Golden Knights aren’t out of it. Every game but one has been decided by one goal, and those three games could be deemed as coin flips.

The Stars haven’t dominated this series, but they are in a commanding position that if they play like they have one more time, they’ll be partying like it’s 2000. DeBoer has been known for pushing the right buttons at the right time. He needs to push a couple if they want to play beyond Monday, or that will be one awkward flight home from Edmonton.

“This is a long way from over,” DeBoer said, “and we’re going to be a tough out.”