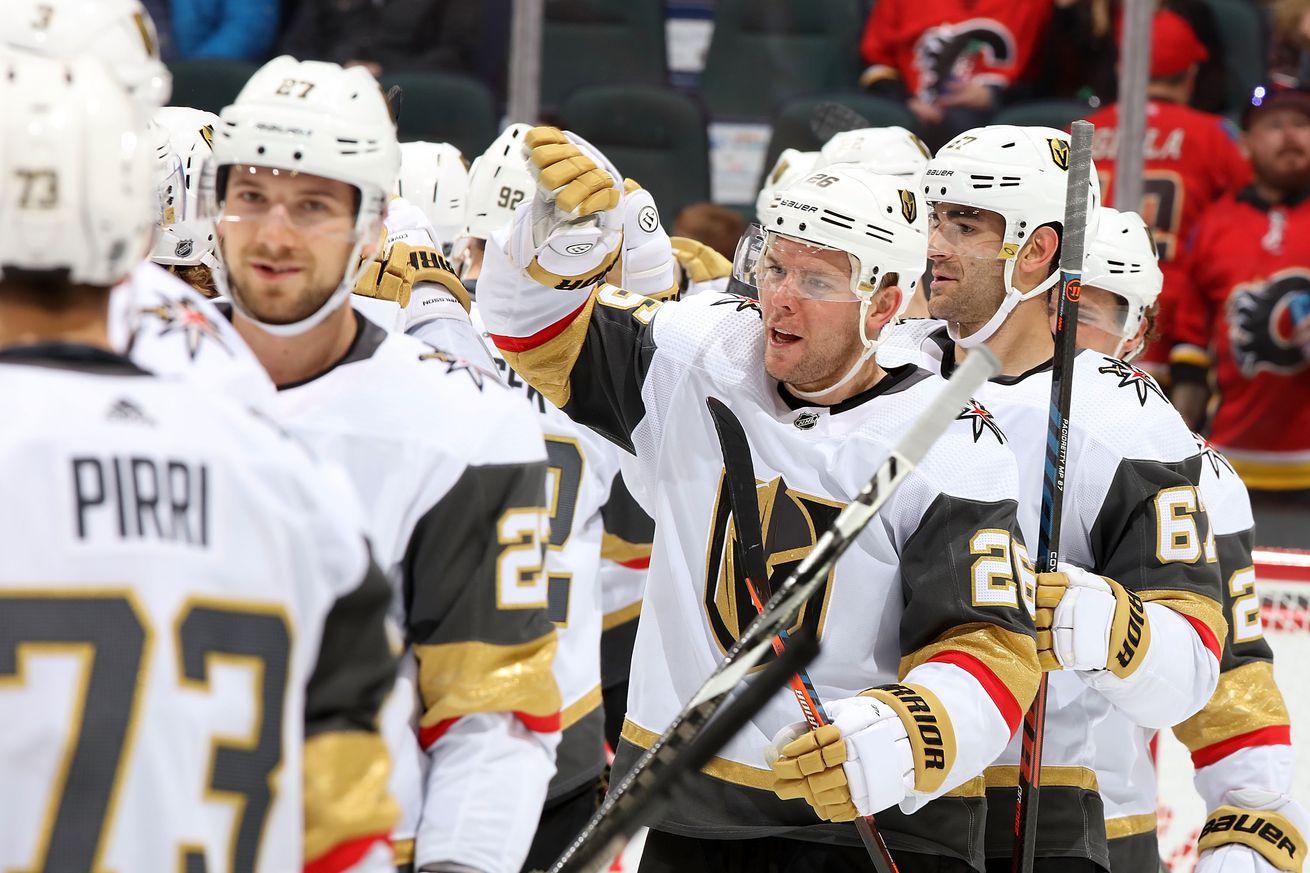 A roster of 33 players was released Saturday for Vegas’ third postseason trip in franchise history.

The Vegas Golden Knights are taking a roster of 33 players into training camp Monday, with none expected to opt out of the league’s return to play plan.

Players are to opt out by 2 p.m. PT on Monday if they wish to not partake in the 24-team resumed season. Nine players across the league have chosen to sit out at time of writing.

When the Golden Knights return to business at 10 a.m. Monday, the main roster should be in tow and be available to travel to Edmonton when hockey action resumes on Aug. 1, nearly five months since the season paused due to concerns surrounding COVID-19.

“I’m really happy with how the players have handled this,” Golden Knights general manager Kelly McCrimmon said during a Zoom call on Sunday. “I think the state of our team is strong. The health of our team is very good.”

The exception to Monday’s camp will be top prospect Peyton Krebs. A surprise addition to the roster, Vegas’ first round selection in 2019 has to spend one more day in quarantine before being allowed to participate in team action. He will join the Golden Knights on Tuesday.

Krebs missed development camp and training camp last summer while recovering from a partially torn Achilles. The 19-year-old had 60 points in 38 games with Winnipeg of the WHL this season while being its captain.

“We were all very impressed by his professionalism and we know his players were as well. He’s an elite young player that, at worse, is going to get great experience,” McCrimmon said. “It’s a chance for Peter DeBoer to see Peyton Krebs, who of course hasn’t had the opportunity.

“The bottom line with the decisions that we’ve made in respect to camp are who can help us win a Stanley Cup game? We’ve brought the people to camp that we believe can help win us a Stanley Cup game. There are situations where you rely on your depth, and we want to see Peyton in this situation to evaluate him further.”

Vegas will be using 30 skaters (18 forwards, 12 defensemen) and three goalies at training camp. By the time the Golden Knights head to Edmonton to take part in their round robin play, the roster will need to be a maximum of 31 players, including goalies.

One of the goalies will be Oscar Dansk, going with Marc-Andre Fleury and Robin Lehner. McCrimmon said Dansk, who has made five appearances in two seasons with Vegas, is seen as someone who could play a role in the future of the Golden Knights’ goaltending situation.

“Oscar, to me, has established himself as the next goalie in our organization. Oscar spent the entire pause in Las Vegas, so he’s been ready. I think we’re comfortable with that.”

This will be, of sorts, the first training camp for the Golden Knights under DeBoer. Vegas was 15-5-2 in 22 games under DeBoer, who took over for the fired Gerard Gallant on Jan. 15, and went 11-2-0 in its final 13 before the season’s pause.

“I think with our situation, Pete had 22 games where he coached and guys know what he stresses, what he stands for, what he wants,” McCrimmon said. “I think this is a great opportunity. It’s back to school, really. It’s really valuable for us in large part to be picking up on all the things he implemented on the fly.”

The Golden Knights will play an exhibition game against an undetermined opponent between July 28-30, and then their first round robin game — to determine seeding in the round-of-16 Stanley Cup Playoffs — on Aug. 3 against the Dallas Stars. Following that are games against the St. Louis Blues (Aug. 6) and Colorado Avalanche (Aug. 8) with the playoffs begin Aug. 11.

But this will also be a situation where Vegas won’t host a playoff game, where T-Mobile Arena has become one of the biggest home-ice advantages come mid-April. While the Golden Knights would benefit from home-ice advantage in a round or two, McCrimmon said Vegas will adjust accordingly given the situation.

“I don’t think the NHL will do things to create atmosphere in a game,” he said. “With the stakes as high as they will be, I don’t see [lack of fans will have] a tremendous negative impact. We’d all like to be playing at T-Mobile in front of our fans, but this is going to be really good hockey, and it’s going to be competitive. I think they’ll settle in and develop a new normal.”