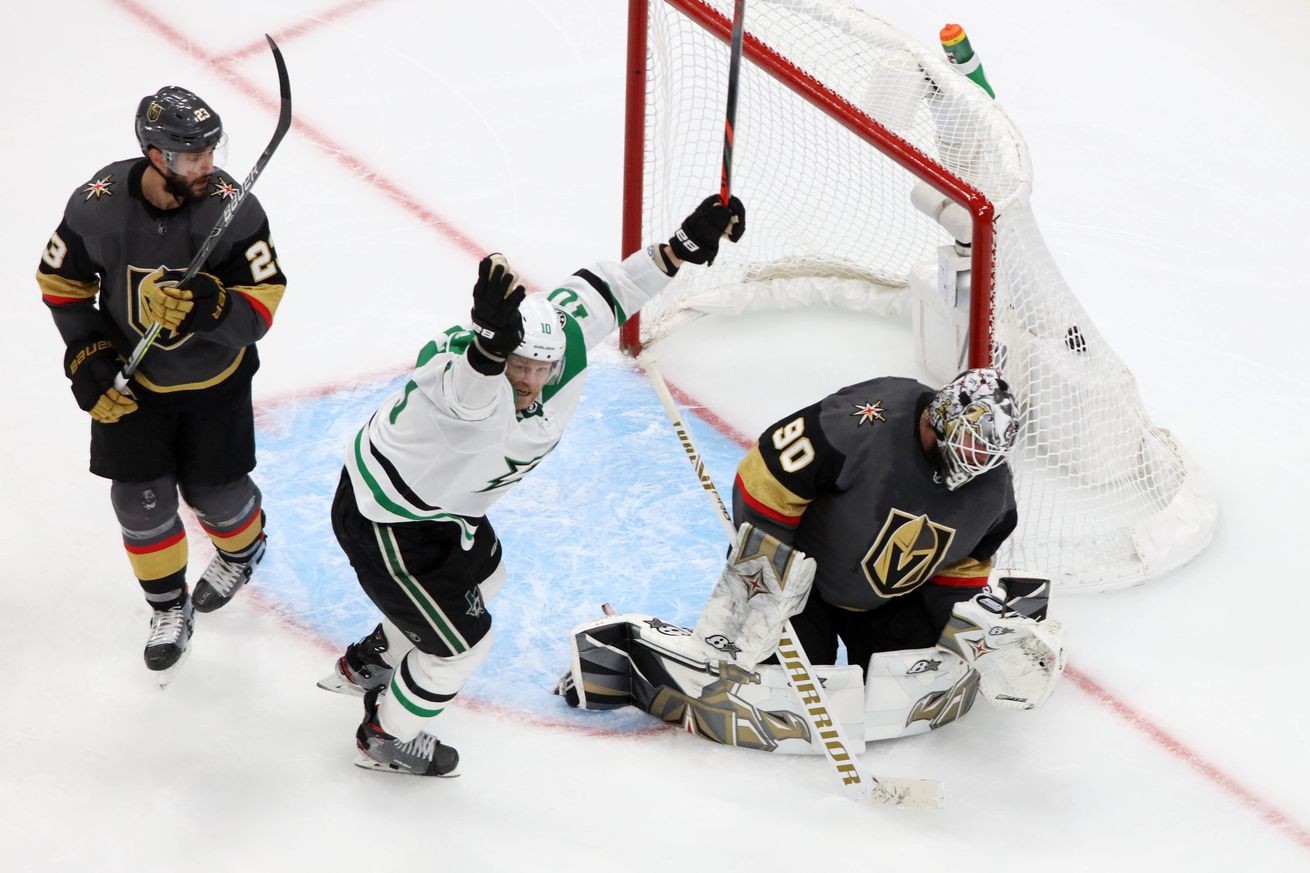 The Knights shined early but faded down the stretch.

The Vegas Golden Knights’ season is over.

The Knights blew a two-goal lead in Game 5 of the Western Conference Final Monday night, losing 3-2 in overtime to the Dallas Stars, who will advance to the Stanley Cup Final.

It looked as though the Knights were in full control of the game with a 2-0 lead early in the third period, but instead of Vegas closing out the game and forcing a Game 6 to extend the series, the Stars scored two goals in the third and completed the comeback in overtime.

Denis Gurianov scored the series-clinching goal just 3:36 into extra time. It was Dallas’ second power-play goal of the night, both of which were scored by the second unit.

Vegas entered Game 5 coming off back-to-back losses and facing elimination for the second time this postseason. From the first shift of the game, it appeared as though the Knights weren’t ready to go down without a fight. However, that effort seemed to fade away in the third period as Dallas took over the game and ultimately the series.

Things started out well, though.

Chandler Stephenson gave the Knights an early lead on a breakaway just over eight minutes into the contest. Stephenson used his virtually-unrivaled speed to create plenty of separation, split the pads of Anton Khudobin and tucked the puck five-hole to get the Knights on the board.

It was a critical goal considering the Knights’ ongoing scoring woes, particularly among the forwards.

Though that 1-0 lead would hold until the third period, the Knights dominated possession through 40 minutes.

In fact, in the first two periods combined, the Knights held a 15-4 edge in high-danger Corsi, though a lot of that was thanks to three straight power-play opportunities in the middle frame (all unsuccessful). Though it rarely proved to be relevant in this series, it’s worth at least noting that Vegas had more than twice as many shots through 40 minutes (25-14).

But the third period is what will be remembered from this game.

Down 1-0, Dallas came out to start the third with a solid scoring chance right off the bat, but Tyler Seguin‘s shot hit Robin Lehner’s pad and kicked out to Paul Stastny. Stastny fed the puck to Reilly Smith, creating a 2-on-1 with Jonathan Marchessault. Smith, who hadn’t scored a goal since Game 1 against Vancouver, showed zero signs of hesitancy or rust and sent a perfect laser top-shelf to give Vegas what seemed like a significant 2-0 lead just 15 seconds into the final frame.

The goal was the fastest to start a period in the playoffs in franchise history.

It seemed as though Vegas was on its way to forcing a Game 6.

Benn was set up in front of the net, picked up a rebound off a bad-angle shot by Esa Lindell and lifted it above Lehner’s shoulder to cut the lead in half.

All Jamie Benn does is score big goals. Golden Knights need to hold on here. pic.twitter.com/JkkOKqnCbT

Alexander Radulov cross-checked Nate Schmidt prior to the shot, but no call was made. But by that point, Dallas had stolen all the momentum, and it was yet another net-front battle won by the Stars. The goal was the start of things to come as Vegas began to implode.

Dallas continued to push and ultimately drew a tripping call on Alex Tuch, setting up a power play with 5:24 remaining in the game. Vegas’ potent penalty kill was on its way to killing off its third penalty of the night, but the Stars’ second unit had something to say about that.

Joel Kiviranta, who scored a hat trick in Game 7 of Dallas’ second-round series against Colorado, hadn’t done much in this series. However, he came up huge for his team once again, scoring his fourth of the playoffs with under four minutes left in the game.

Kiviranta picked up a loose puck and roofed it over Lehner to stun Vegas and even things up at 2-2.

The Golden Knights were 10 minutes away from extending this series to a Game 6.

Now they’re just hoping to get to overtime and have a chance. pic.twitter.com/sXX41LWBiF

On the equalizer, it was another lost battle around the crease; this time, however, two Dallas skaters were able to get behind the Vegas defense. That can’t happen ever, but especially late in an elimination game.

Schmidt was in great form early on in the game, but like the Knights, his game unraveled in the third.

The Knights spent the rest of the period scrambling, desperate to hold Dallas off and reach overtime.

They got their wish, but Vegas did not come out like a team facing sudden-death elimination. There was no sense of urgency, and much like in Game 3, Dallas was the hungrier team at the start of overtime.

It wasn’t long before the Knights found themselves shorthanded once again. Zach Whitecloud went to clear the puck from the defensive zone, and his stick collided with Andrew Cogliano’s. The result? A delay-of-game penalty at the absolute worst time possible.

The Stars were 3-0 in overtime in the playoffs, and much to the detriment of the Knights, Gurianov helped them keep their undefeated streak going.

The rest is history.

Though Whitecloud watched the season end from the penalty box, this game was not on him.

For one thing, the goal was soft, completely stoppable and one Lehner absolutely should have had.

He was not screened, the shot came from the right circle and it went right through him. He simply missed it, which is tough to do in sudden-death elimination.

For another thing, the goal was simply the final straw of the Knights’ team-wide collapse.

It’s not like the Knights played an outstanding 60-minute game and lost on an unlucky penalty. The third period is what cost the Knights this game, and the team wasn’t prepared for overtime either way.

Vegas was in a position to not only win the game and extend the series but also to gain confidence. Smith’s goal just 15 seconds into the third period could have turned out to be a series-changing play.

But the Knights watched their season slip through their fingers. They played not to lose, failed to call timeout or make adjustments as Dallas’ pressure continued to mount, and allowed Dallas to take over the narrative. Not to mention the fact that they scored just eight goals in the entire series.

After defeating Calgary and Colorado, the Stars needed just five games to get past the Knights. They will face either Tampa Bay or the Islanders in the franchise’s first Stanley Cup appearance since 2000.

The Knights, however, are headed home.