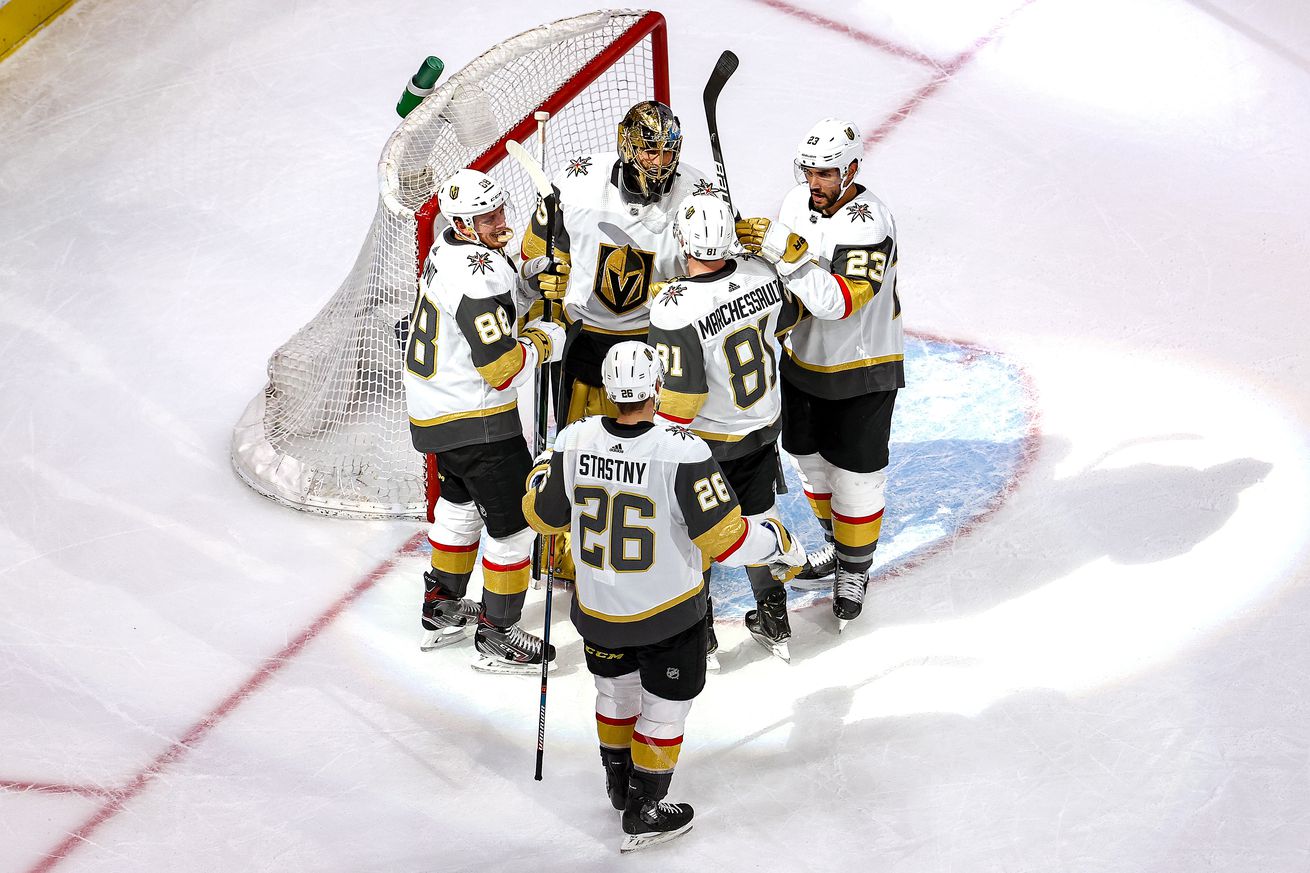 The third period has been kind to the Vegas Golden Knights all postseason, and tonight was no exception.

Despite trailing 3-2 at the start of the final frame, the Knights came out with a purpose and scored three unanswered goals in the span of five minutes and 37 seconds to turn this game upside down.

It had been a back-and-forth contest up until that point, with the Vancouver Canucks seemingly turning the tide with the only two goals of the second period.

But Max Pacioretty’s second goal of the game at the 7:02 mark of the third period gave Vegas a lead it would not surrender. William Karlsson added an insurance tally less than two minutes later to help the Knights close this one out by a final score of 5-3.

The Knights now hold a 3-1 lead in the best-of-seven series.

It was Marc-Andre Fleury’s first start in two weeks, and he was sharp, coming up with some massive saves in the final minutes of the game. He is now 2-0 in the playoffs with a win in each series.

Pacioretty, Karlsson and Mark Stone combined for seven points on the night as the top line had its best game of the series.

Pacioretty got things started with a power-play strike nearly 10 minutes into the game.

What a feed by Stone to find Pacioretty and lets it rip through traffic.

Fourth goal of the postseason for Pacioretty, assists to Stone and Theodore.#VegasBorn pic.twitter.com/1055MB2OfG

But less than two minutes later, the Canucks’ power play returned the favor. Elias Pettersson was given time and space, and he picked his spot and beat Fleury cleanly.

Just a thought: Don’t give 40 in blue that much time to wind up.

Miller and Hughes assist on Pettersson’s seventh goal of the playoffs.#VegasBorn #Canucks pic.twitter.com/RGWPMevv3F

Chandler Stephenson was the one who took the penalty that led to Pettersson’s sixth of the postseason, though he made up for it less than two minutes later, as both teams combined for three goals in under four minutes.

Stephenson and Shea Theodore completed a crisp give-and-go before Stephenson found twine, thanks in part to a screen by William Carrier.

However, Stephenson took another ill-advised penalty in the second period, which led to another power-play goal for the Canucks, this time off the stick of Tyler Toffoli.

That gave the Canucks their first lead of the game, as Bo Horvat had evened things up earlier in the frame.

Horvat’s goal looked depressingly familiar, as once again the Nate Schmidt and Brayden McNabb pairing allowed two Canucks to get behind them and score.

Fleury left all alone to deal with two guys in blue.#VegasBorn pic.twitter.com/h4I1YoKqL2

The Canucks won more puck battles and outscored the Knights 2-0 in what was a rough second period for Vegas.

But everything changed in the third.

It all started with a strong shift by the third line less than three minutes into the frame, which eventually put the puck on the stick of Jon Merrill. Merrill, who replaced Nick Holden in the lineup tonight, sent the puck along the blue line to the waiting Schmidt, who had already taken two blasts at the net on the same shift. The third time was the charm, however, as Schmidt beat Jacob Markstrom to even things up at 3-3.

It was the first career playoff point for Merrill, and it started an offensive surge by the Knights that changed the game and possibly the series.

Pacioretty scored his second of the game to give Vegas a 4-3 lead at 7:02. The puck went in off Pacioretty’s skate at the side of the net off a give-and-go with Schmidt.

Just 1:27 later, Karlsson scored from the same spot, though this wasn’t just a good bounce for Vegas. Pacioretty got the primary assist on the play as he fed Karlsson from behind the net.

The goal gave Vegas its first two-goal lead of the night, and it proved to be enough of a cushion to get the job done.

There were some close calls down the stretch, particularly when Fleury took a two-minute minor for delay of game.

Perhaps his most crucial stop of the game came against Adam Gaudette on the ensuing power play.

With some help from Mr. Post on a rocket from J.T. Miller, though, Fleury and the Knights were able to kill off Vancouver’s fifth power play of the game and hold on for the win.

That wasn’t Fleury’s most impressive save of the night, however. That designation belongs to his point-blank stop on Pettersson in the third period.

It was Fleury’s second huge save on Pettersson, whom he stopped on a breakaway late in the first.

Fleury finished the night with 28 saves on 31 shots for a .903 save percentage, and he certainly helped and inspired the Knights to battle back.

It was another game in which Vegas controlled possession, though that doesn’t necessarily lead to wins, as was the case in Game 4 against Chicago and Game 2 against Vancouver.

Notably, however, the teams finished with nearly the same number of high-danger chances at 5-on-5, with 11 for Vegas and 10 for Vancouver. This kept Fleury busy.

But the Knights were by far the better team at 5-on-5 where it mattered, holding a 4-1 edge in goals, including all three in the third period.

Clearly, discipline remains an issue for the Knights, who took five penalties for the third game in a row. One of the penalties tonight was a blown high-sticking call, but four of them were offensive-zone offenses, which is unacceptable in such a crucial game.

Fatigue also seemed to be a factor, though that worked in Vegas’ favor.

For one thing, Fleury obviously was very fresh for the second half of the back-to-back. That doesn’t mean the loss is on Markstrom, however, as he made several key saves, including one on Stone and one on Jonathan Marchessault, to keep his team in the game.

Markstrom lays out to make the biggest save of the game. Stone couldn’t get it past his skate.#VegasBorn #Canucks pic.twitter.com/7BgrJdTnr1

But the Vegas skaters had a lot more energy, which was quite evident in the third period. The Canucks played with a shortened bench in Game 3 when they were looking for offense, while the Knights continued to roll four lines, as they’ve done all year. The same was true tonight, and the depth up and down the Vegas lineup was a major component of Vegas’ win.

The three-goal third period is proof of that.

Now the Knights find themselves one win away from reaching the Western Conference Final for the second time in three years.

Vegas will have a chance to close out the series Tuesday night in Game 5.