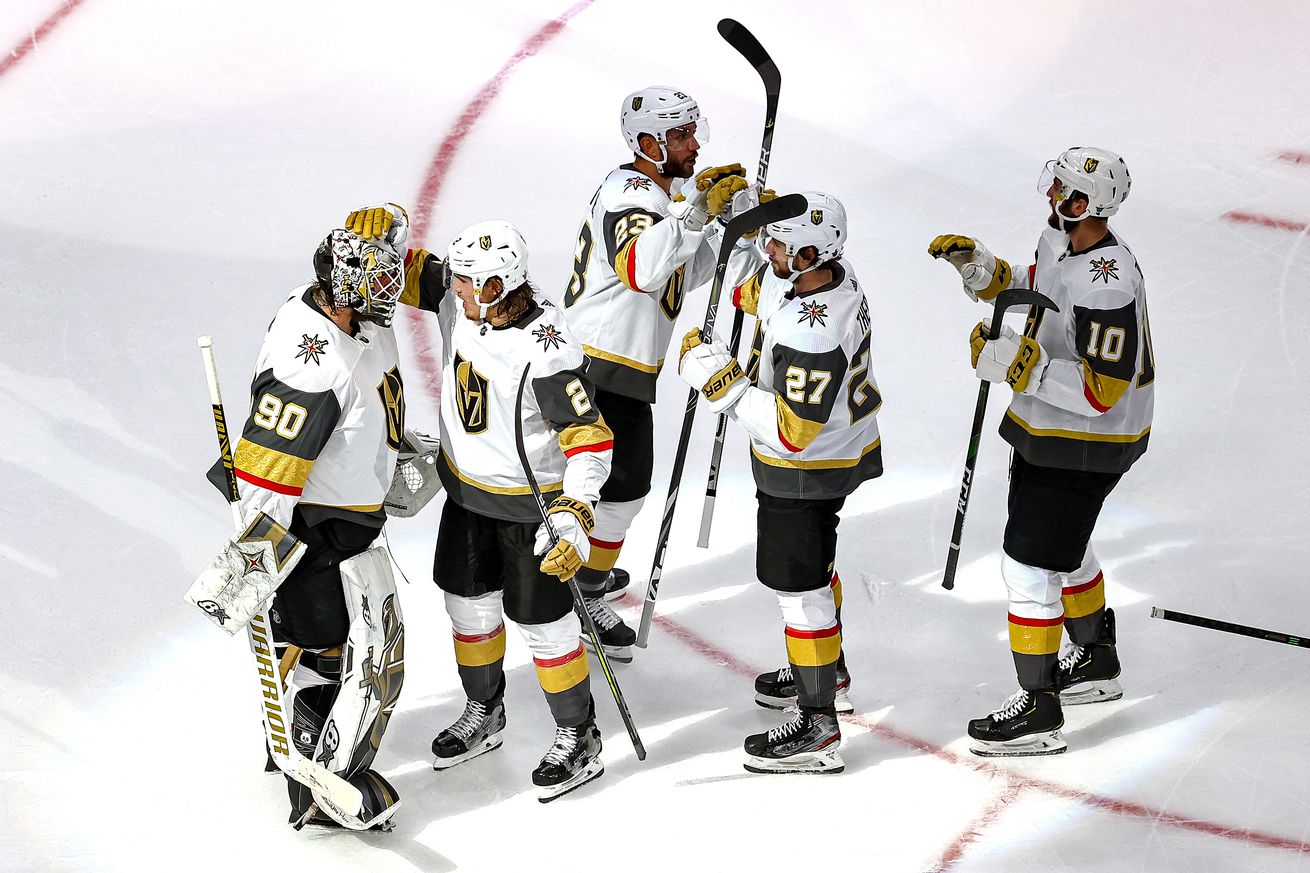 The Knights held the Canucks off the scoresheet for the second time in three games.

The Vegas Golden Knights secured a 3-0 win in Game 3 against the Vancouver Canucks Saturday night in Edmonton. The Knights now hold a 2-1 edge in the best-of-seven series.

It was the first half of a critical back-to-back set, and it came two days later than scheduled after the NHL postponed games in response to a player-led initiative to stand in solidarity with other sports leagues in protest of systemic racism.

But on the ice, it was exactly the kind of bounce-back effort the Knights needed following a disappointing 5-2 loss in Game 2.

Robin Lehner made 31 saves in his second shutout of the series. He was particularly clutch early on when Vegas took an early penalty. The Canucks’ power play looked dangerous and generated four shots, but Lehner stood tall to keep it a scoreless game.

Alex Tuch and Zach Whitecloud rewarded him with some goal support as they scored just one minute and 23 seconds apart to give Vegas a 2-0 lead just 5:28 into the contest. The Knights scored two goals on their first three shots of the game.

Tuch scored on a breakaway, finding twine for the fourth straight game and seventh time this postseason.

Whitecloud had a standout performance. He finished tied for first on the team in individual Corsi (6) at 5-on-5 and finished the game with four shots, six blocks, three hits and a plus-one rating in 15:19 of ice time, which included 6:15 on the penalty kill. Oh, and he scored this dandy.

Both teams traded chances during an intense opening frame, but it was Vancouver that really brought the pressure. The Canucks held a 7-3 edge in high-danger Corsi at all strengths (5-1 at 5-on-5) as well as a commanding 67.76 percent expected goal share.

Lehner stopped all 16 shots he faced, and he was busy.

Vegas took the first three penalties of the game, all of which came in the opening 10 minutes. Vancouver got an extended 5-on-3 when both Jonathan Marchessault and Reilly Smith were in the box.

But Lehner was ready, and he made several huge stops on the Canucks’ top centers.

Robin Lehner has been unreal. Big save on Horvat, and just made a huge stop on Pettersson on the one-timer.#VegasBorn pic.twitter.com/c5WOtBpyzj

Here’s the stop on Pettersson right after making the save on Horvat. 19 and 81 more than approve.#VegasBorn pic.twitter.com/5Jq4uL0Awx

Though the Knights later got two power plays of their own, the man advantage was, shall we say, out of sorts. It wasn’t a disaster since Vegas didn’t give up a shorthanded goal, but it was lackluster and sloppy at best.

The Knights slowed things down considerably in the second period, though, taking a bite out of Vancouver’s offense and holding Vancouver to just seven shots and zero high-danger chances.

Vancouver led the way in Corsi in the first (15-7), but Vegas course corrected in the second and finished the frame with a 20-8 edge in Corsi as well as a 10-0 lead in high-danger Corsi and an 85.68 percent expected goal share.

Mark Stone made it a three-goal game with a power-play strike early in the third period.

Sixth goal of the playoffs for 61, assists to Theodore and Reilly.#VegasBorn pic.twitter.com/hnPR8yZZWT

Like Tuch and Whitecloud, he beat Jacob Markstrom cleanly.

Lehner had to make a few key stops, and the Knights gave Vancouver yet another power play to make things exciting. But the Knights took control of this game in the second period, and they did not let go.

However, Lehner was in the zone for his second career postseason shutout and second of the week.

With the win, the Knights set another NHL record by reaching 25 postseason wins in just 38 games.

The @GoldenKnights required the fewest games to reach 25 postseason wins among all NHL franchises, besting the previous low of 43 shared by the Islanders and Oilers. #NHLStats #StanleyCup pic.twitter.com/RwAer4IslP

However, the Knights have a lot of work to do in order to get to the only postseason win total that matters: 16.

That work starts tomorrow night in a critical Game 4, which could be a series-changing game.

It will be interesting to see whether Marc-Andre Fleury gets the nod in the second half of the back-to-back or whether Pete DeBoer will go back to Lehner after his strong performance in Game 3. Either way, it’s a quick turnaround for the Knights, who will have to contend with a resilient Canucks club.