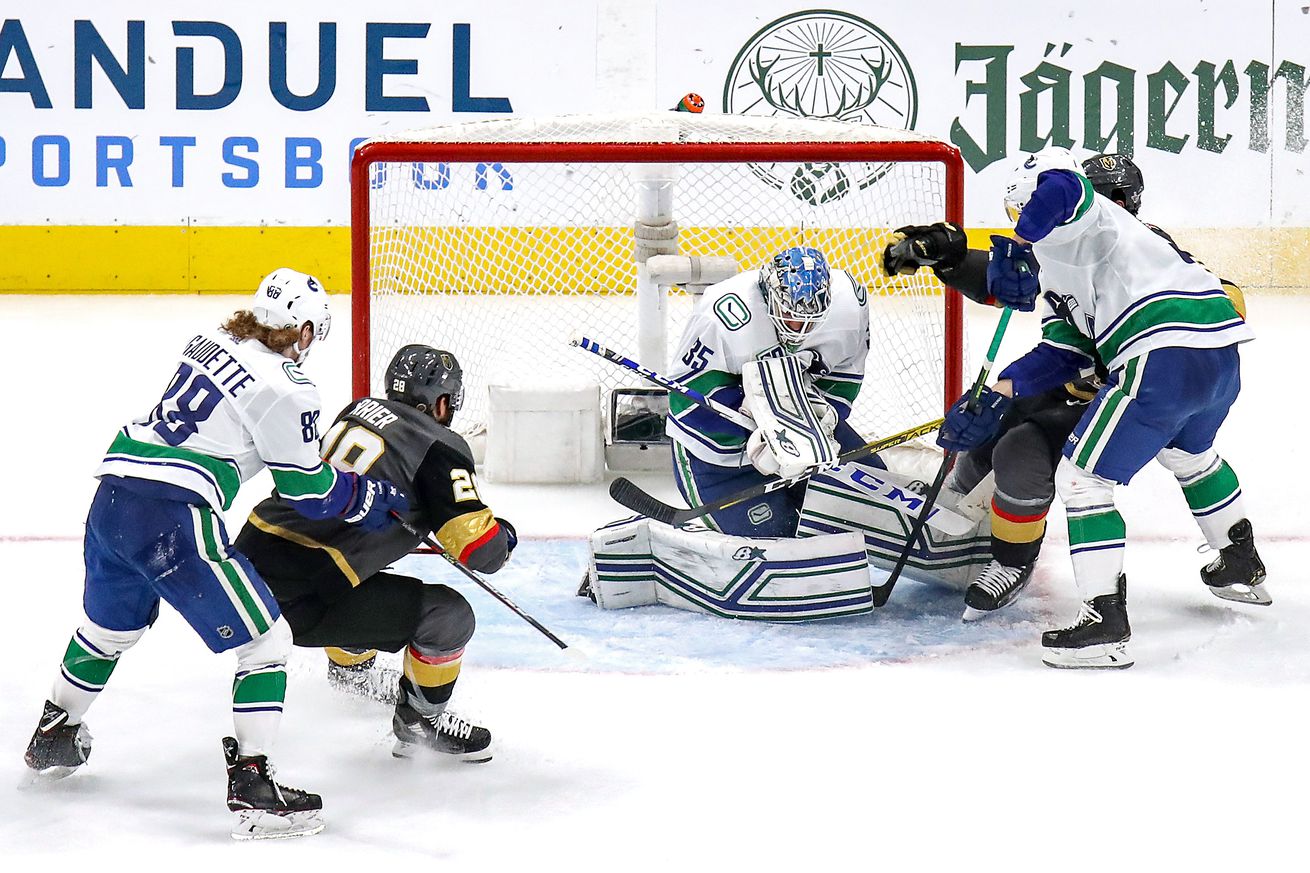 A surprise goaltender start for the Canucks led to their second win.

The Vancouver Canucks made a late change in the crease, and it turned out being the key to their victory Tuesday night in Edmonton.

Thatcher Demko, getting his first playoff start, stole the game for Vancouver in Game 5 as the Vegas Golden Knights fell short in a 2-1 loss. Demko replaced Jacob Markstrom, who was deemed “unfit to play” after starting every postseason game for Vancouver.

Shea Theodore gave Vegas a brief lead late in the second period, but it lasted only 24 seconds. The Canucks then took a 2-1 lead just over three minutes into the third. Vegas dictated play for much of the contest, but a few mistakes proved costly, and Demko took care of the rest.

He stopped 43 of 44 shots on the night, saving 2.5 goals above expected and making nine stops on 10 high-danger shots.

That’s despite the fact that Vegas was the superior team throughout much of the game, which was in large part thanks to the team defense.

Vegas completely shut the Canucks down at the start of the game. The Knights didn’t allow a shot on net until 10:26 into the game, while getting 10 shots at 5-on-5.

The Knights also allowed just one shot on net in two minutes on the penalty kill in the opening period. Vegas’ defense came to play in Game 5, and it provided an initial boost.

To start the second period, the Golden Knights did the exact same thing. They didn’t allow the Canucks to get a shot on goal through the first 12:28 of the period, and like the first, when Vancouver finally did, it was a soft chance.

Two power-play opportunities in the period for Vegas likely helped, although the Golden Knights didn’t score on either (they did have four shots and 0.54 expected goals between those two opportunities, however).

Shortly after the second man advantage, though, Theodore did this:

The allure to this is now gone 24 seconds after, but this has been deemed illegal in the United States.#VegasBorn pic.twitter.com/dmqjF0nHns

Theodore made the effort to keep the puck in the zone, weaved through traffic like a masterful taxi driver and beat Demko with a top-shelf laser. It was Vegas’ 25th shot of the game, and it gave the Knights the 1-0 lead. Continued effort eventually paid off, but that would be Vegas’ lone tally.

The lead wouldn’t last long, either.

Just 24 seconds later, Brock Boeser got separation from Brayden McNabb (who continues to have a tough postseason) and scored to even things up at 1-1.

Brock Boeser shoves Brayden McNabb off like it’s nothing, and Boeser finishes off the feed from Miller to tie the game.#Canucks #VegasBorn pic.twitter.com/RuQwQ4Q1p1

It’s clear that that was McNabb’s man, and he was having problems dealing with Vancouver’s speed. That hasn’t improved over the course of the first five games of this series.

The Golden Knights allowed the Canucks to get more opportunities early in the third, and that eventually led to a goal by Elias Pettersson, who deflected a puck past Robin Lehner:

This was another one on McNabb, this time for not clearing Pettersson from in front of the net. Lehner had virtually no chance on that save.

Vegas outshot Vancouver 34-13 at 5-on-5 and 44-17 across all strengths. The Knights controlled the puck and ensured Vancouver’s chances were few and far between. It still wasn’t enough, however, and that was because of Demko.

Demko had only played against the Golden Knights once in the past in a relief appearance on March 9, 2018, and he made 16 saves on 17 shots.

Vegas will need to find ways to beat Demko (if he’s back in net in Game 6) or continue to overpower the Canucks if Markstrom takes back the net. Watching the Canucks turn a tip and a deflection into goals while Vegas didn’t get enough of either type of scoring chance must have left an impression.

Both of Vancouver’s goals in this game were high-danger, a continued pattern for the Knights’ defense (even in a good game otherwise).

Game 6 is set for Thursday night. No matter who’s in net for the Canucks, the Golden Knights will need to get more than one goal as they look to close out the series.