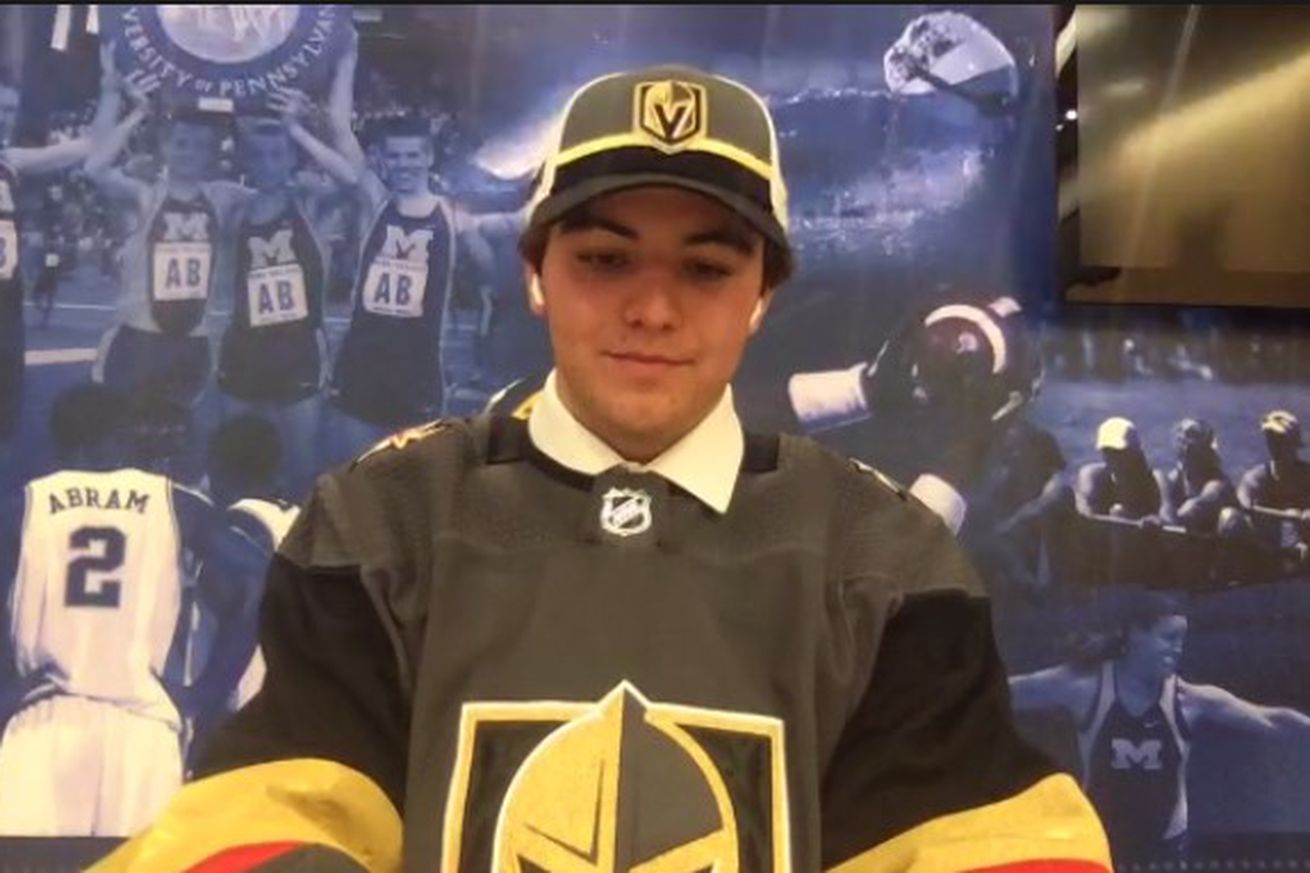 Vegas selects the forward from the Chicago Steel of the USHL.

Golden Knights general manager Kelly McCrimmon has been keeping an eye on Brendan Brisson for the last two years, only it was this past year the interest piqued.

His trajectory the past two years was something that appealed to the Vegas scouting department, thus the decision to select the center from the Chicago Steel of the USHL with the 29th pick in the first round of the NHL Draft on Tuesday.

“He’s really shown improvement over the two years when our staff, who their job is to project who’s going to be the best players three, five years from now, they’re really excited for how high his ceiling could be,” McCrimmon said.

The line of trajectory begins at the University of Michigan, where Brisson has committed to playing next season. Brisson had his draft party at The Big House, the famous football stadium at Michigan’s campus.

Brisson was the rookie of the year of the USHL this past season, totaling 59 points (24 goals, 35 assists) in 45 games and was the 20th ranked North American skater according to NHL Central Scouting. His 59 points were good for second on the Steel, with a team-high 24 coming on the power play.

“When I heard my name called by Vegas, I don’t even know the words to describe how I felt,” Brisson said. “My whole body went numb. I’m looking forward to waking up the next morning, getting better and wearing a Golden Knights jersey soon.”

Brendan said having a dad in the business and being around that collection of talent helped him prepare himself for as he continued to develop into an NHL prospect; how much the players worked, how they took care of their bodies and how they continued to get better.

“I remember Nathan MacKinnon would come home and shoot probably 500 pucks a day after a long day,” Brisson said. “John Tavares, always watching what he’s eating; Sidney was just a great person, great athlete. It really wears off on you as a kid, and you look up to them as superheroes. Looking back, I took those experiences to heart and I think it helped me perform and get better as a player.”

Brisson (5-foot-10, 179 pounds from Manhattan Beach, California) describes himself as a two-way center with an offensive game “that pushes me.” A left-shot forward, Brisson likes to set up from the right circle, which could make him an effective wing in stints. His slapshot is powerful as a center.

“The last three, four years, I’ve worked on my skating a lot,” Brisson said, saying that’s the one aspect he needs to get better at. “I feel like my game is driven by my hockey sense and my shot, just the way I make players around me better and always looking for the open guy.”

McCrimmon said Brisson’s ability to hold the puck and be a playmaker were what the scouting department liked most about his game. The Golden Knights have made that a habit with four of their five first-round picks in team history. Cody Glass and Peyton Krebs, the lone forwards left of that bunch, have been deemed strong puck carriers with a knack for making plays.

Brisson said he skates with Golden Knights defenseman Alec Martinez in the summer, so he has familiarity with the organization.

“I feel like I kind of passed out,“ Brisson said when he heard his name called. “I couldn’t be more excited to get started.”